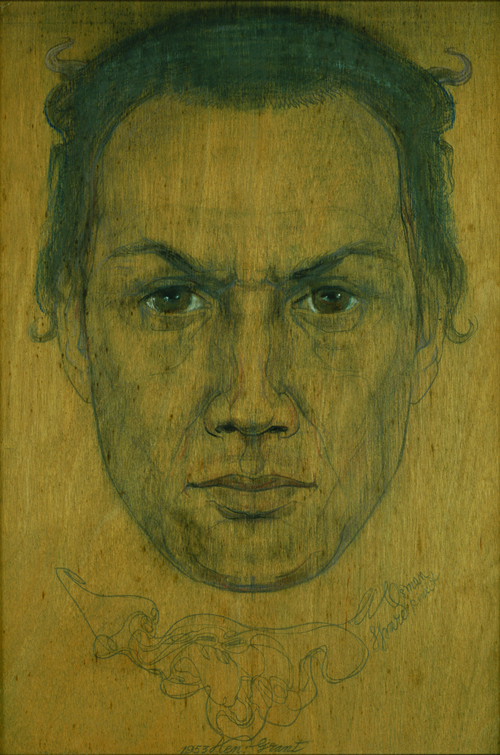 “After several further meetings and an exchange of letters, Grant agreed to work for Crowley as his secretary and personal assistant. Now living in relative poverty, Crowley was unable to pay Grant for his services in money, instead paying him in magical instruction. In March 1945, Grant moved into a lodge cottage in the grounds of Netherwood, a Sussex boarding house where Crowley was living. He continued living there with Crowley for several months, dealing with the old man’s correspondences and needs. In turn, he was allowed to read from Crowley’s extensive library on occult subjects, and performed ceremonial magic workings with him, becoming a high initiate of Crowley’s magical group, the Ordo Templi Orientis (OTO). Crowley saw Grant as his potential successor, writing in his diary, ‘value of Grant. If I die or go to the USA, there must be a trained man to take care of the English OTO.’However, they also argued, with Grant trying to convince Crowley to relocate to London. On one occasion Crowley shouted at him: ‘You are the most consummate BORE that the world has yet known. And this at 20!’

“Grant’s family disliked that he was working for no wage, and pressured him to resign, which he did in June 1945, leaving Netherwood. Crowley wrote to Grant’s father, stating that he was ‘very sorry to part with Kenneth’ and that he felt that Grant was ‘giving up his real future.’ To David Curwen, an OTO member who was another of his correspondents, he related his opinion that ‘I may have treated him too severely.’ Crowley put Curwen in contact with Grant, with Grant later asserting that he learned much from Curwen, particularly regarding the Kaula school of Tantra; in his later writings he made reference to Curwen using his Order name of Frater Ani Abthilal. Although they continued to correspond with one another, Crowley and Grant never met again, for the former died in December 1947. Grant attended his funeral at Brighton crematorium along with his wife Steffi.”

Some would consider that Grant developed a singular and quite provocative vision of Thelema and magick and his relation with Crowley and Ordo Templi Orientis were at times contentious. But few question his sincereity, his passion for the Work or the originality of his theorizing and practice.