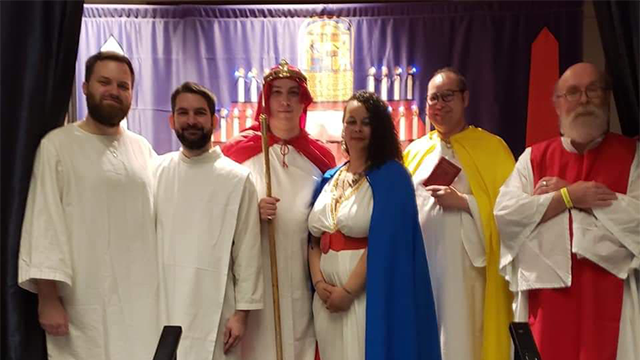 At Pantheacon this year, Thelemites from Healiopolis generously hosted a hospitality suite throughout the con, creating the con’s only dedicated Thelemic space; the suite even hosted its own series of events, including a discussion by Lon Milo DuQuette on his latest book Son of Chicken Qabalah. Sib. Ayin/R.A.D. and Fr. David of William Blake Lodge, O.T.O., along with Sib. Belquis, Fr. Kakoupat, and others, assisted and led several events like the Sunday “Thelemic Mass,” a eucharistic ritual created by James A. Eshelman and organized by Healiopolis, as well as a talk by David on his Witchcraft Activism book, and a collective reading by Weiser Books authors.

In case you’re wondering, Healiopolis is a registered California non-profit organization, primarily dedicated to community service in San Francisco and founded as a safe place where all Thelemites, regardless of affiliation, can feel welcome to celebrate, practice magic and ritual, and to serve their community. For the Thelemic Mass, the image to the right illustrates a few differences from the Gnostic Mass: “The Temple EAST – Upon a dais of three steps is a shrine or High Altar covered with a crimson altar cloth, on which may be embroidered a sun blaze, fleur-de-lis in gold, or other suitable emblem. Above it is a super-altar, at whose top is Stele 666 with four candles on each side. Below the stele is a place for Liber Legis with six candles on each side. Below this again is the grail with roses on each side and room in front of it for the paten. On each side, beyond the roses, are two great candles. On each side of the High Altar is a pillar. That to the south is red, with a white א [Aleph] upon it. That to the north is white, with a red ל [Lamed] upon it. All this is enclosed within a great indigo veil, initially closed.”

The Thelemic Mass Collect for The Earth is as follows:

Mother of Fertility on whose breast lieth water, whose cheek is caressed by air, and in whose heart is the Sun’s fire, womb of all life, recurring grace of seasons, answer favorably the prayer of labor, and to pastors and husbandmen be thou propitious. With love we honor them that did of old adore Thee and manifest thy VICTORY unto the world: Shekinah, Shakti, Sophia, Athena, lymma, Isis, and Hé Kokkiné Guné. With these also: Sappho, Hypatia, Medea, Miriam, Fatimah, and Guenevere; Joan of Arc, Hildegard von Bingen, Caterina Benincasa, Teresa of Avila, Mother Teresa of Calcutta, and Rebecca Cox Jackson, who bore the labarum of Light through the darkness. And these also: Eva von Buttlar, Helena Petrovna Blavatsky, Ida Craddock, Anandamoyi Ma, and Vivian Godfrey Barcynski; “Anna Sprengel,” Florence Farr, Violet Firth, and Ann Davies, who nurtured a Golden Dawn; Rose Edith Crowley, Leah Hirsig, Sarah Jane Wolfe, and Phyllis Evelina Seckler — O Boundless ecstasy of the Naught, who gathereth the Blood of all saints into thy Cup. With all thy Daughters of the Sangrayle, we honor and love Her that is above, within, and about us. May thine Essence be here measureless, mystical, mysterious, and maternal to manifest this feast.

When Thelemites attend events that are largely “pagan” in nature, we gain the opportunity to experience new ideas and approaches to our philosophies. It’s a chance to dispel rumors and misunderstandings about our practices, and to show non-Thelemite pagans what we have to offer.