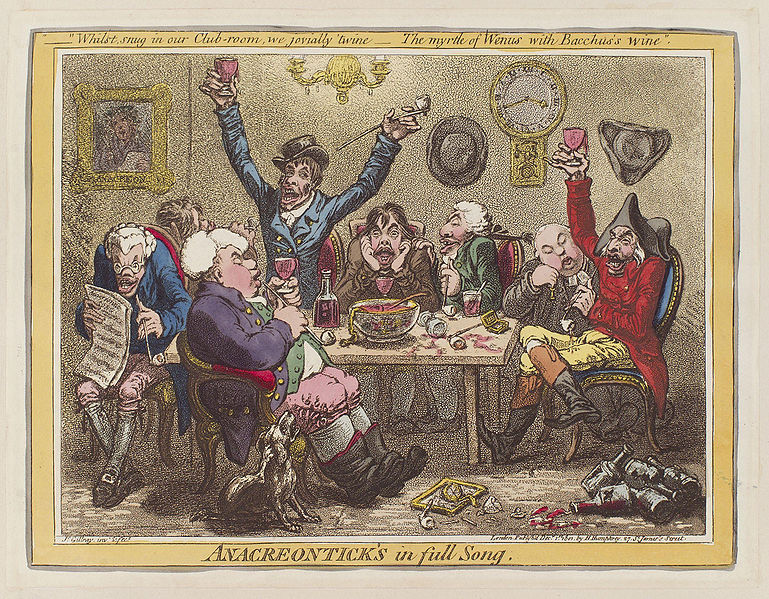 In Liber DCCXI, verse IV, the Prophet of the Lovely Star wrote:

“These three Gods are Dionysus, Apollo, Aphrodite. In English: wine, woman and song.

“Now it would be a great mistake to imagine that the Greeks were recommending a visit to a brothel. As well condemn the High Mass at St. Peter’s on the strength of having witnessed a Protestant revival meeting. Disorder is always a parody of order, because there is no archetypal disorder that it might resemble. Owen Seaman can parody a poet; nobody can parody Owen Seaman. A critic is a bundle of impressions; there is no ego behind it. All photographs are essentially alike; the works of all good painters essentially differ.

“Some writers suppose that in the ancient rites of Eleusis the High Priest publicly copulated with the High Priestess. Were this so, it would be no more ‘indecent’ than it is ‘blasphemous’ for the priest to make bread and wine into the body and blood of God. True, the Protestants say that it is blasphemous; but a Protestant is one to whom all things sacred are profane, whose mind being all filth can see nothing in the sexual act but a crime or a jest, whose only facial gestures are the sneer and the leer. Protestantism is the excrement of human thought, and accordingly in Protestant countries art, if it exist at all, only exists to revolt. Let us return from this unsavoury allusion to our consideration of the methods of the Greeks.”

According to the Encyclopedia Britannica:

“From his erotic verse there survive striking images of beloved young men: the peaceful character of Megistes, the eyes of Cleobulus, the blond locks of the Thracian Smerdies. Girls also appear, such as the girl from Lesbos and a shy and subdued Thracian girl. (Both are probably hetairai [highly cultivated courtesans] attending a symposium.) For Anacreon, love is light, fantastic, and bizarre—but never dramatic—as shown in his various images of Eros. The poet recommends the same approach, joyous and carefree rather than licentious and violent, for the dinner party. As ancient critics had already observed, Anacreon’s poetry finds room for the same human types that would populate Greek mime and New Comedy, such as the nouveau riche rascal Artemon and the bald and tiresomely pretentious Alexis.” [Aphrodite]

By the 18th century, Anacreon had attained mythic stature in the U.K. where the Anacreontic Society formed and met every two weeks. at the Crown and Anchor Tavern in central London. He was depicted as being a dedicated Bacchanalian who died from choking on a grape seed. This is largely due to exaggerations of Hellenistic and Byzantine Greek admirers of his work who, in creating poems “inspired” by his, exaggerated the strain of drunken eroticism. [Dionysius]

1
To ANACREON in Heav’n, where he sat in full Glee,
A few Sons of Harmony sent a Petition,
That He their Inspirer and Patron wou’d be;
When this Answer arriv’d from the JOLLY OLD GRECIAN
“Voice, Fiddle, and Flute,
“No longer be mute,
“I’ll lend you my Name and inspire you to boot,
“And, besides, I’ll instruct you like me, to intwine
“The Myrtle of VENUS with BACCHUS’s Vine.

2
The news through OLYMPUS immediately flew;
When OLD THUNDER pretended to give himself Airs_
If these Mortals are suffer’d their Scheme to pursue,
The Devil a Goddess will stay above Stairs.
“Hark! already they cry,
“In Transports of Joy
“Away to the Sons of ANACREON we’ll fly,
“And there, with good Fellows, we’ll learn to intwine
“The Myrtle of VENUS with BACCHUS’S Vine.

3
“The YELLOW-HAIR’D GOD and his nine fusty Maids
“From HELICON’S Banks will incontinent flee,
“IDALIA will boast but of tenantless Shades,
“And the bi-forked Hill a mere Desart will be
“My Thunder, no fear on’t,
“Shall soon do it’s Errand,
“And, dam’me! I’ll swinge the Ringleaders I warrant,
“I’ll trim the young Dogs, for thus daring to twine
“The Myrtle of VENUS with BACCHUS’S Vine.

4
APOLLO rose up; and said, “Pr’ythee ne’er quarrel,
“Good King of the Gods with my Vot’ries below:
“Your Thunder is useless_then, shewing his Laurel,
Cry’d. “Sic evitabile fulmen, you know!
“Then over each Head
“My Laurels I’ll spread
“So my Sons from your Crackers no Mischief shall dread,
“Whilst snug in their Club-Room, they Jovially twine
“The Myrtle of VENUS with BACCHUS’S Vine.

5
Next MOMUS got up, with his risible Phiz,
And swore with APOLLO he’d cheerfull join_
“The full Tide of Harmony still shall be his,
“But the Song, and the Catch, & the Laugh shall bemine
“Then, JOVE, be not jealous
Of these honest Fellows,
Cry’d JOVE, “We relent, since the Truth you now tell us;
“And swear, by OLD STYX, that they long shall entwine
“The Myrtle of VENUS with BACCHUS’S Vine.

6
Ye Sons of ANACREON, then, join Hand in Hand;
Preserve Unanimity, Friendship, and Love!
‘Tis your’s to support what’s so happily plann’d;
You’ve the Sanction of Gods, and the FIAT of JOVE.
While thus we agree
Our Toast let it be.
May our Club flourish happy, united and free!
And long may the Sons of ANACREON intwine
The Myrtle of VENUS with BACCHUS’S Vine. [THE TRIFECTA! A song about wine and sex!]

In the early 19th century, Baltimore lawyer Francis Scott Key was being temporarily held aboard a British war ship during the bombardment of Fort McHenry. Being moved by the American forces successful resistance he scribbled down some lyrics to the tune of a familiar drinking song… you guessed it, “To Anacreon In Heaven”!

Ergo, baked into the structure of the National Anthem of the United States is hymnody invoking Energized Enthusiasm! No wonder we’re enjoined to stand erect during performances of this song! (hehe!) As a bonus, here’s the full lyric to the “Star Spangled Banner,” SELDOM performed in its entirety. Especially at sporting events…

O say can you see, by the dawn’s early light,
What so proudly we hailed at the twilight’s last gleaming,
Whose broad stripes and bright stars through the perilous fight,
O’er the ramparts we watched, were so gallantly streaming?
And the rockets’ red glare, the bombs bursting in air,
Gave proof through the night that our flag was still there;
O say does that star-spangled banner yet wave
O’er the land of the free and the home of the brave?

On the shore dimly seen through the mists of the deep,
Where the foe’s haughty host in dread silence reposes,
What is that which the breeze, o’er the towering steep,
As it fitfully blows, half conceals, half discloses?
Now it catches the gleam of the morning’s first beam,
In full glory reflected now shines in the stream:
‘Tis the star-spangled banner, O long may it wave
O’er the land of the free and the home of the brave.

And where is that band who so vauntingly swore
That the havoc of war and the battle’s confusion,
A home and a country, should leave us no more?
Their blood has washed out their foul footsteps’ pollution.
No refuge could save the hireling and slave
From the terror of flight, or the gloom of the grave:
And the star-spangled banner in triumph doth wave,
O’er the land of the free and the home of the brave.

O thus be it ever, when freemen shall stand
Between their loved homes and the war’s desolation.
Blest with vict’ry and peace, may the Heav’n rescued land
Praise the Power that hath made and preserved us a nation!
Then conquer we must, when our cause it is just,
And this be our motto: ‘In God is our trust.’
And the star-spangled banner in triumph shall wave
O’er the land of the free and the home of the brave!