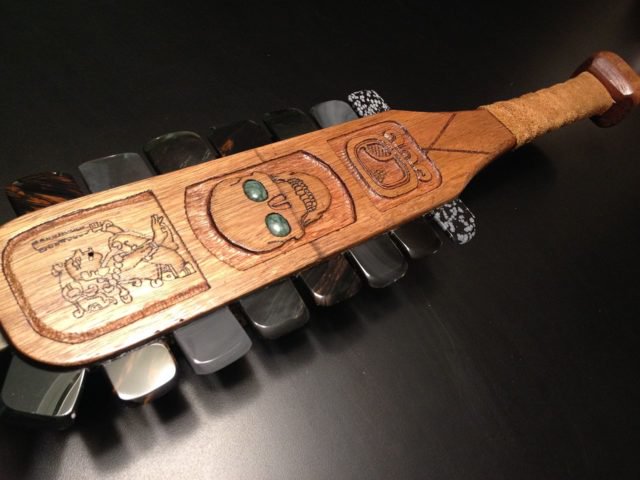 When the Spanish invaders encountered the Aztecs, they made copious notes about their military especially their weaponry.  One of the most amazing pieces was the macuahuitl (alternately spelled maquahuitl and in the Taino language known as the macana).  The macuahuitl was made of a plank of pine or oak, which was one to 3 feet long.  The dangerous part of the macana was made up of sharp pieces of obsidian (volcanic glass) protruding from its edges. Both edges were carved with a slot into which was fitted a row of very sharp rectangular obisdean blades of about 1-2 in long and spaced along the length of the paddle.  The long edges were set in the paddle with some sort of natural adhesive, perhaps bitumen or chicle.

However, these weapons were probably not designed to kill since the wooden blade would not have incurred any deep penetration into flesh.  Also it should be noted that Aztec warfare tactics was to capture other warriors, not kill them.  They would bring back the captured warriors to use as blood sacrifices to their gods.  However, the Aztec could inflict considerable damage on their enemies by using the macuahuitl to slash and cut. Apparently Christopher Columbus was quite taken with the macuahuitl and arranged for one to be collected and taken back to Spain. Several of the Spanish chroniclers such as Bernal Diaz described macuahuitl attacks on horsemen, in which the horses were nearly beheaded.

Garduno Arzave, an experimental archaeologist, created a macuahuitl to help to understand how deadly it was.  FYI no horses were beheaded in the experiment.  Garduno Arzave concluded that using the weapon in a straight percussive force results in little damage and the loss of the obsidian blades. However, if used in a circular swinging motion, the blades can maim an opponent, taking them out of combat before taking them prisoner, a purpose known to have been part of Aztec “Flowery Wars”

If you would like to own one, there is a gentleman on ebay who sells them for around $280.  http://www.ebay.com/itm/AZTEC-SWORD-MAYAN-WAR-CLUB-MACUAHUITL-OBSIDIAN-SWORD-/271414203851

To read more at  – http://www.thevintagenews.com/2017/09/08/the-aztec-macuahuitl-a-sword-with-obsidian-blades-was-sharp-enough-to-decapitate-a-horse/