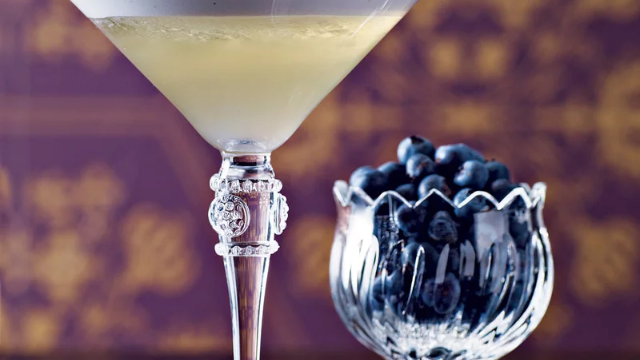 Tomorrow, July 24, is the feast of Cameron, also known as Marjorie Cameron Parsons Kimmel, American artist, poet, actress, occultist and Thelemite. While some only know of her for being the Scarlet Woman “summoned” by Jack Parson’s Babalon working, many others know her for her art and her magical work in the desert. Among her friends was filmmakers Curtis Harrington; she appeared in two of Harrington’s films, The Wormwood Star and Night Tide. Author Spenser Kansa titled his biography of Cameron Wormwood Star: the Magical Life of Marjorie Cameron.

In honor of Cameron, here is a drink recipe to try out.

Fill a pint glass with ice. Add the aquavit, sherry, absinthe and bitters and stir well. Strain into a chilled martini glass. Spray the Sweet Blueberry Foam on top and garnish with the skewered blueberries.

Want to learn more about Cameron?