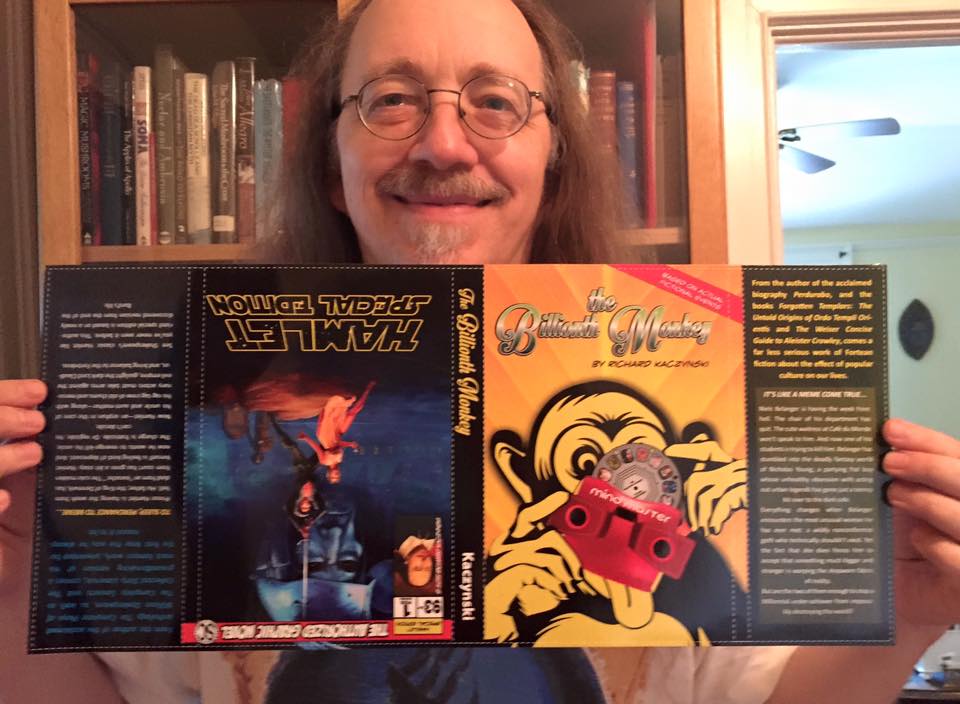 It’s like a meme come true: When urban legends mysteriously start to become real, a gawky junior professor and a goth who shouldn’t exist race desperately through pop culture landmarks and defend themselves against fabled assassins in order to stop a Millennial under-achiever from impossibly destroying the world.

This is the setting of The Billionth Monkey, Richard Kaczynski’s hilarious new urban fantasy which explores how popular culture, social media bubbles, and urban legends shape the way we perceive the world.

Weird fiction author Don Webb calls it “a crazy quest novel equal parts of Dan Brown and Terry Pratchett.” Steve Englehart, the creator of the definitive Batman and of Star Lord from Guardians of the Galaxy, says the book “endlessly creative.”And author Lon Milo DuQuette dubs it “As delightfully funny and entertaining as it is enlightening,” comparing it to Robert Anton Wilson and Douglas Adams.

The book’s title is a mash-up of the so-called “hundredth monkey effect” and the fact that, in late 2012, Facebook hit one billion users. “Every day, my feed is a stream of echo chambers, confirmation biases, doubt merchants, fake news, and just plain misinformation,” Kaczynski explains.

“I’m also struck by how pervasive pop culture references are. A meme, for instance, comments on life through shorthand reference to some fictional or pop culture icon, whether it’s Morpheus, Tardar Sauce, Willy Wonka, Kanye West, Boromir, or the Hair Guy.

“Social media is a reflection of how we see the world, a comical Plato’s Cave. As people interact with each other more and more through what’s essentially a funhouse mirror, they come to believe that the reflection is how the world really is. Social media becomes reality. And that’s the inspiration behind The Billionth Monkey.”

Because the story deals with the influence of popular culture and social media, Richard marks the release of The Billionth Monkey with various Internet Easter eggs related to events in his book. Of note is the six-page mini-comic, Hamlet Special Edition, which depicts how Shakespeare “improves upon” his beloved classic in newly-discovered, late-life revision of Hamlet. Although included with the novel, Richard is also making the comic available for free at www.stanleysmarvelouscomics.com/-hamlet-special-edition-preview.

To create this tribute to his childhood loves of both comics and Star Wars, Richard enlisted the help of legendary comic book artist Greg LaRocque, who not only redesigned the Flash’s costume to its current, iconic version, but also penciled hundreds of comics including Spider-Man, The Avengers, Legion of Super-Heroes, Power Man, Iron Fist, and a five-year run on The Flash. For Hamlet Special Edition, Greg penciled and inked six pages in the classic bronze-age style.  Meanwhile Robert Randle, critically acclaimed for his graphic novel Serial Artist (www.nyjournalofbooks.com/book-review/serial-artist), painted the Hildebrandt-homage cover.

Richard Kaczynski is the author of Perdurabo: The Life of Aleister Crowley (2010) www.northatlanticbooks.com/shop/perdurabo-revised-and-expanded-edition/, which the Times Literary Supplement called “the major biography to date” of this seminal figure of modern magick. He has also written Forgotten Templars: The Untold Origins of Ordo Templi Orientis (2010) www.richard-kaczynski.com/index.php/home/books/forgotten-templars-2/ and The Weiser Concise Guide to Aleister Crowley (2009) redwheelweiser.com/detail.html?id=9781578634569, among others.

The Billionth Monkey is available in paperback, ebook, and limited edition hardcover formats.