Agostino Taumaturgo announced on FB that he’s finished  The Big Book of Exorcisms andis making it available via Lulu:

This is NOT an “official” exorcism book.
This book is not sanctioned by Church authorities, nor does it only contain the same three or four methods you’ve heard about time and again.
Within this book are the forgotten traditions of ages past, the wisdom of exorcists through several centuries, and many methods that have been forgotten through falling into disuse. Also included are the personal thoughts of one present-day exorcist, and his methods when out in the field.
You will also find:
☩ Why the modern idea of demons having “legal rights” is not true.
☩ How exorcists should approach contracts with the devil.
☩ When and why a person should not attempt exorcism.
☩ How to deal with hostile spell-casters effectively.
☩ Masses and Hymns for exorcism, for breaking spells, and other needs.
☩ What pre-Vatican II Moral theologians have said about exorcism.
☩ The historical relationship between Exorcists and Necromancers.
☩ Procedures for “aftercare,” after a patient has been delivered.
☩ Exorcisms for people, houses, animals, food, against witchcraft, succubi, incubi, and the Evil Eye.
☩ Procedures for interrogating a spirit, and getting it to stop laughing or lying.
☩ Multiple methods for the faithful to protect themselves.
☩ The Traditional Orthodox exorcism against Vampires.
☩ And much, much more!
Rites from the medieval period, the renaissance, the early modern period and the present are included, along with advice for what to do in specific situations the exorcist may encounter in the field, and what methods exist beside exorcism for countering the influences of evil.
———-
PAPERBACK (BLACK AND WHITE)
https://www.lulu.com/…/paperback/product-9rq8q6.html…
HARDCOVER (FULL COLOR)
https://www.lulu.com/…/hardcover/product-5m984z.html… 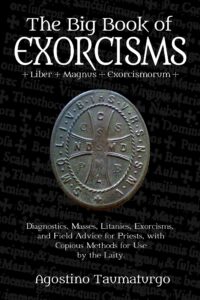