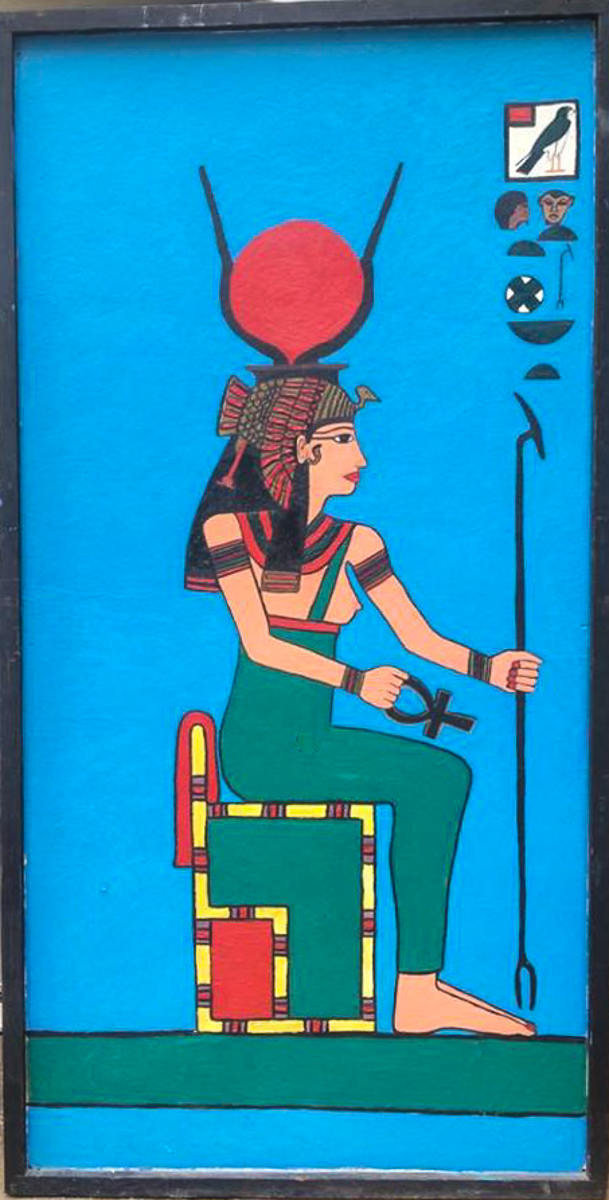 These magnificent Egyptian paintings were done by Lola D. Wolfe; a Ninth Degree member of the Ordo Templi Orients who served as Grand Secretary General under Hymenaeus Alpha (aka Grady L. McMurtry).  On July 3rd, 1982 e.v. Lola was chartered to perform initiations from Minerval through third degree. The following month she travelled throughout Europe, performing initiations in service to Grand Lodge and also visited Crowley’s archives at the Warburg in order to retrieve certain documents that Grady had requested. The paintings of Ra (Harmachis) and Isis stand 10 feet tall and are over four feet wide.  They hung for many years on either side of the “tomb” at Thelema Lodge (Grand Lodge number 1).  Later, when the Lodge relocated, much of the original temple furnishings remained behind with the community of Thelemites still living in the home, this would include Lola’s paintings.  Though no longer affiliated with the Order this location became known as Oz House to the locals and continued to be inhabited by Thelemites who often hosted travelers from abroad. Lola’s paintings would remain in the temple at Oz House for many years. However, eventually the community at Oz House dispersed and fortunately Lola’s paintings were preserved by members of the community who valued them.

The third painting, that of Thoth, also originated from Oz House and was painted on a door of one of the rooms upstairs.  It, like the other two paintings, passed into private possession but was for sometime displayed in the temple of Hodos Chamelionis; an encampment of the OTO located in Sacramento, CA in the mid 90’s and from there gifted to me.

These three paintings have now, for the first time in decades, been reunited and are undergoing the process of being carefully cleaned and restored so that they may displayed and enjoyed for many more years to come.  I am both honored and fortunate to care for these items which are very much part of the OTO history in northern CA. – Frater Orpheus