“There are few works in the life of Austin Osman Spare as notorious as his illustrations for Krafft-Ebing’s Psychopathia Sexualis. First documented in the early 1930s by the socialite Viola Bankes, Spare shared various anecdotes about this commission with friends and acquaintances until the end of his life. However, drawings of a directly sexual nature remain surprisingly scarce in the artist’s oeuvre, despite his reputation for producing erotica. Recent biographers have even cast doubts on Spare’s anecdotes, noting Krafft-Ebing died long before the young artist became widely known. The discovery of the Psychopathia Sexualis folio in the archives of the Kinsey Institute is therefore a major milestone towards reclaiming and understanding the life story of the artist.

“Working closely with the team at the Kinsey Institute, FULGUR PRESS is pleased to offer you the first publication of this masterpiece of the grotesque. Edited by Ryan M. Pfeiffer, Rebecca Walz and Robert Shehu-Ansell, this book reproduces the forty-four portfolio drawings in astonishing detail, drawn from hi-resolution scans made directly from the original artwork. These extraordinary works by Spare have been augmented with a preface from Rebecca Fasman, curator at the Kinsey Institute, an introduction detailing the discovery by Ryan M. Pfeiffer and Rebecca Walz, and illustrated analytical essays from Elijah Burgher, Jeremy Biles and Robert Shehu-Ansell.” 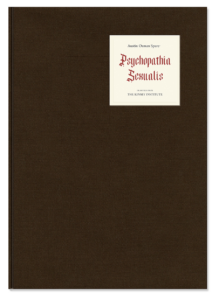