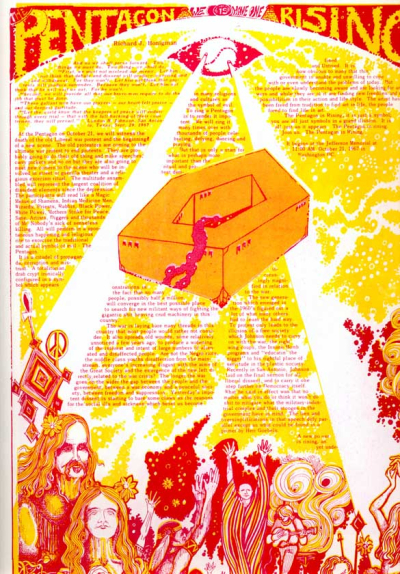 Appropos of nothing, here’s an extensive oral history one of my favorite pieces of meta-thaumaturgy (second only to the transformation of United States effected by EGC Bishop Harry Smith via his talisman titled The Anthology of American Folk Music),  the “Exorcism of the Pentagon.” Participants included The Fugs, Alan Ginsberg, Kenneth Anger. Advisors included Harry Smith.

“[Occultist/animator/archivist] Harry Smith had produced the first Fugs album and was an old friend of mine who used to hang out at my bookstore Peace Eye all through the ‘60s. So I went to Harry and asked him what happened in an exorcism and he gave me some advice. So he filled me in on what his view was. He told me about consecrating the four directions, surrounding it, circling it, using elements of earth, air, fire and water, alchemical symbols to purify the place, to invoke certain deities, and so on. So I sing-songed a whole retinue of deities past and present, imaginary and real, to summon the strength to exorcise this place. It was part real, part symbolic, part wolf ticket, part spiritual, part secular, part wishful thinking and part anger. And it had humor. You gotta have the universal humor. And, since I knew Indo-European languages, I learned this Hittite exorcism ritual. I actually put together a decent exorcism.”

and listen to the opening invocation here: https://www.youtube.com/watch?v=qZ0RkMcPbQA This is intended only for amusement purposes and not actual use.