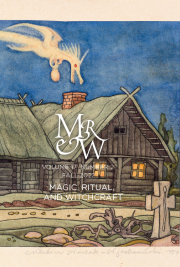 Volume 17, Number 2, Fall 2022 of Magic, Ritual, and Witchcraft was recently published by the University of Pennsylvania.  This publicaiton is “A peer-reviewed scholarly journal, Magic, Ritual, and Witchcraft draws from a broad spectrum of perspectives, methods, and disciplines, offering the widest possible geographical scope and chronological range, from prehistory to the modern era and from the Old World to the New. In addition to original research, the journal includes book reviews, editorials, and lists of newly published work.”

Contents of the new issue include:

The Magic of Science and the Science of Magic in Evangelical Publicity by James Bielo.

Ripples from a (Seer) Stone: Religious, Technological, and Magical Modalities by Jon Bialecki.

The Ethics of the Miraculous: Magical Technologies and Religious Pedagogies by Claire Fanger.

The Dragon as a Household Spirit: Witchcraft and Economics in Early Modern and Modern Sources by Johannes Dillinger.

The Undiscovered “Witches” of the Bible: On the Absence of Ezekiel 13:17–23 in the Early Modern Witchcraft Debate by Alinda Damsma.

The Demoniac-Exorcist: Richard Rothwell and the Dispossession of John Fox in Early-Seventeenth-Century England by Brendan C. Walsh.

Faces of Proteus: History of Modern Paganism as a Religious Identity by Dmitry Galtsin reviewed by Kaarina Aitamurto.

Bedlam in the New World: A Mexican Madhouse in the Age of Enlightenment by Christina Ramos reviewed byCarole A. Myscofski.

Occult Roots of Religious Studies. On the Influence of Non-Hegemonic Currents on Academia around 1900 ed. by Yves Mühlematter and Helmut Zander reviewed by
Stanislav Panin.

The Scent of Ancient Magic by Britta K. Ager reviewed by Charlotte Spence.

The End(s) of Time(s): Apocalypticism, Messianism, and Utopianism through the Ages ed. by Hans-Christian Lehner reviewed by Arina Zaytseva.

The Reputation of Edward II, 1305–1697: A Literary Transformation of History by Kit Heyem reviewed by Laurel Zwissler.