“There’s a 1955 photograph of the South London mystic and artist Austin Osman Spare, in the last years of his life, playing the clarinet, his hair on end, looking like a wild jazz musician. “Improvising an original theme,” reads a caption in Spare’s own scratchy hand, “Libertine of the Gods”.

“While Spare was hardly a libertine, he was undoubtedly an improviser and experimenter, developing styles and techniques to create a visual aesthetic that, while broader than many people realise, was always his own. He was also a tinkerer with a fascination for radios, which he built for himself and for friends – a hobby popular with men in the 1920s and 30s. Visitors noted that his flats were always littered with exotic totems, tribal art and radio parts, and he regularly painted work onto wooden radio set panels and speaker cabinets (as in the piece illustrated here, sold at Bonhams Auction House in 2015).

“Spare was of course, also an occultist – perhaps primarily so. He communicated regularly with the spirit world, and explored it in trance states, encountering human, non-human and approaching-human entities. For Spare, radio, and the waves that carried the music he loved to listen to, were more than just a metaphor for the spirit world. They were an active mode of conveyance for occult energies and vibrations – the swirling, ectoplasmic tendrils from which odd figures emerge in some of his most dense and haunting work.

“As a painter and draftsman he worked fast, and constantly, producing hundreds of artworks from his teenage years to his death in 1956, aged 69. Ranging from the exquisitely fine to the manically grotesque, his work sometimes incorporated ornate, yet compact, magical alphabets that appear, at first glance, to be asemic, but actually collapse meaning into striking idiographic sigils that would look right at home on any number of black metal albums – and undoubtedly informed many.

“Spare’s combination of irreducible, yet charismatic, strangeness, prodigious artistic talent, satisfyingly enigmatic writing, and his status as a true cultural and social outsider – as well as the somewhat tragic circumstances of his life and death – have made him a highly-appealing figure for artists, occultists and musicians. It also helped that, until relatively recently, original artworks were available for – in art world terms at least – extremely reasonable prices.

“In 2011 we at Strange Attractor Press published the first full biography of Spare, by Phil Baker (due a reprint soon), and in 2016 we revealed Jonathan Allen’s Lost Envoy, reproducing a hitherto unknown tarot deck created by Spare in around 1906, discovered by Jonathan in The Magic Circle Museum archives. We’re now approaching the end of a successful Kickstarter campaign to raise funds to recreate Spare’s tarot as a scale facsimile deck, and also to publish a significantly expanded edition of Lost Envoy.

“To celebrate this, we thought we’d compile a brief, no-doubt-incomplete, playlist of songs and music that draw inspiration from Spare and his work.” 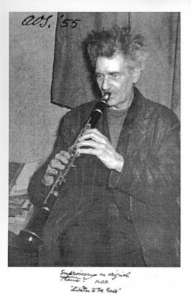