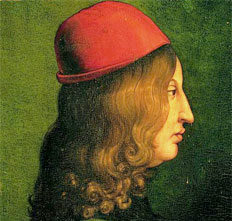 NYBooks.com recently reviewed the newly published Magic and the Dignity of Man: Pico della Mirandola and His Oration in Modern Memory by Brian P. Copenhaver. An excerpt of the review reads:

“But the most famous speech of the Renaissance, the one that thousands of modern students read every year, was never recited, and the debate that it was intended to open never took place. In 1486 a young philosopher named Giovanni Pico della Mirandola (1463–1494), famed for his memory, his polyglot learning, and his daring, decided to hold a public disputation in Rome. Participants would argue about nine hundred theses that Pico had crafted, derived from dozens of authors in as many disciplines. Before the games began, he planned to deliver a long speech that would lay out his intellectual program.”