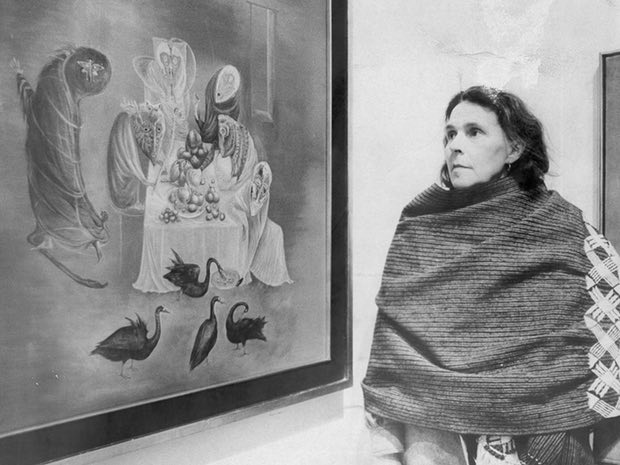 A few days ago, the Guardian ran a story about biographer Joanna Moorhead who’s book, The Surreal Life of Leonora Carrington , has recently been published. Carrington, who died in 2011, was a notable member of the Surrealist movement, admired by her colleagues but not as well known to the public at large. Born in England, she ran away to Europe to carry on an affair with Max Ernst and eventually settled in Mexico where her interest in the occult blossomed. An excerpt from the article says:

“As a teenaged visitor to Italy, Carrington was very taken with the art of Uccello and Arcimboldo; in the Prado in Madrid she became fascinated by Bosch and Bruegel. In Mexico, these influences on her pictures were overlaid by a growing interest in spirits and the occult, which she shared with Varo. Living in a country that Andre Breton anyway called the most surreal nation on earth, she delved into astrological and Mayan imagery, tarot, Kabbalah and Buddhism.”

In occult circles, this was the point where she was approached by a young Alejandro Jodorowsky who became her disciple in the occult arts.

We previously posted about one of their encounters when he reputedly witnessed her performing this incantation clad in nothing but a Jewish prayer shawl http://zeroequalstwo.net/jodorowsky_carrington/

Jodorowsky went into some details about his time as a disciple in his book The Spiritual Journey of Alejandro Jodorowsky.