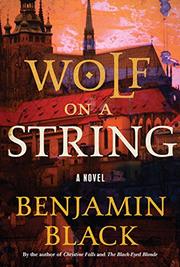 Wolf On a String sounds like the perfect beach read for any self respecting occultist.  The protagonist, Christian Stern, travels to 16th century Prague to study thaumaturgy and instead winds up charged by the Holy Roman Emperor to solve a murder mystery! The New York Times Book Review notes:

“Because of his name, which, in the view of the learned if eccentric Holy Roman Emperor Rudolf II, marks him as a messenger sent by Christ, Christian is invited to court and is even housed in the same room once used by Dr. John Dee, a master alchemist ‘steeped in the mysteries of the kabbalah.’”

This review looks at 3 other books including The Templars’ Last Secret — nuff said!

“A believer in the occult, the emperor thinks Stern is the manifestation of a dream he had in which Christ sends a savior to him to protect the throne against the Turks. Rudolph charges Stern with finding Magdalena’s murderer, a task hastened by Stern’s fear that if he fails, he will be executed.”

Meanwhile you can hear a 24 minute excerpt from the book read here: https://soundcloud.com/macaudio-2/wolf-on-a-string-by-benjamin-black-audiobook-excerpt.