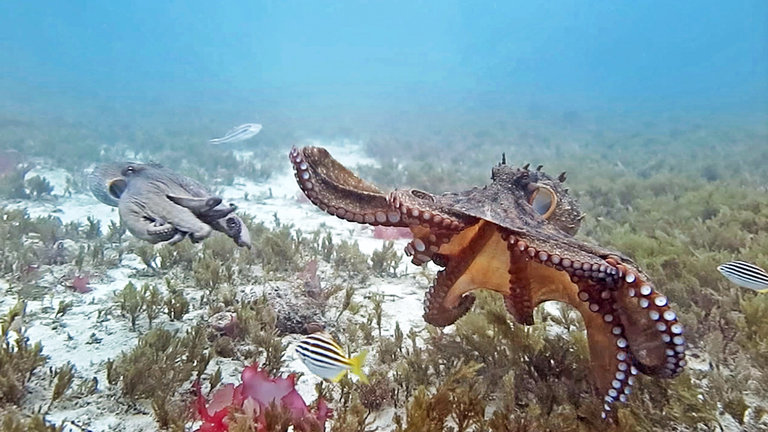 Many ceremonial magicians seek to commune with non-human intelligences, typically of the discarnate sort. The New York Times Book Review covered Other Minds: The Octopus, the Sea and the Deep Origins of Consciousness earlier this year and made some provocative points about the nature of intelligence, its origins and developments and the perceived gap between homo sapiens and the rest of the animal kingdom:

“With neuron numbers comparable to those of mammals, octopuses’ brains are distributed; their arms harbor nearly twice as many neurons as their central brain (through which, incidentally, their esophagus passes. Not to mention: They have three hearts). Neural loops may give the arms their own form of memory. Their skin itself senses light and responds. An octopus is so suffused with its nervous system that it has no clear brain-body boundary.

“Thus most amazing: recognition, their ‘sense of mutual engagement,’ their disarming friendliness. ‘You reach forward a hand and stretch out one finger, and one octopus arm slowly uncoils . . . tasting your finger as it draws it in. . . . Behind the arm, large round eyes watch.’

“Godfrey-Smith watched his dive partner as ‘an octopus grabbed his hand and . . . Matt followed, as if he were being led across the sea floor by a very small eight-legged child.’ Ten minutes later they arrived at the octopus’s den…

“Contrary to some philosophers’ assumptions, consciousness doesn’t just project out; it is a relationship in traffic with the outer world. Consciousness did not ‘suddenly irrupt into the universe fully formed,’ Godfrey-Smith says. ‘Perception, action, memory — all those things creep into existence from precursors and partial cases.’ Asking whether bacteria perceive or bees remember ‘are not questions that have good yes-or-no answers.’ From minimal to elaborate sensing there’s a continuum, ‘and no reason to think in terms of sharp divides.’”