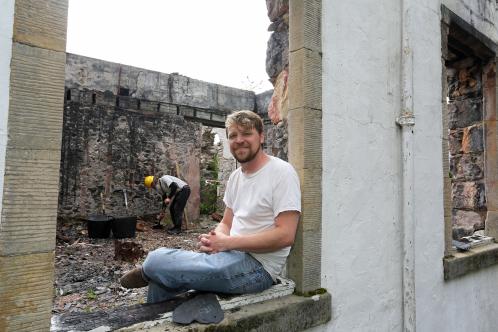 The London Times ran a feature on the effort to clean up and start the rehab work on the remains of Boleskine House. Among those volunteers who showed up was Keith Readdy, author of One Truth and One Spirit.

The smell of burnt plastic lingers high upon the southern banks of Loch Ness. Below, the new owners of Boleskine House stand in the ruins of what was once a kitchen, surveying the charred remnants.

Several weeks have passed since the second big fire in five years ravaged one of Scotland’s most beguiling and eerie properties. In 2002 the Georgian mansion was bought by the secretive Dutch millionaire Trudy Piekaar-Bakker and 13 years later it went up in flames shortly before Christmas.

The latest blaze, which destroyed what remained almost entirely, happened in July, two days after the deeds were transferred to its new owners, who did not have insurance. Police have made two arrests on suspicion of arson.