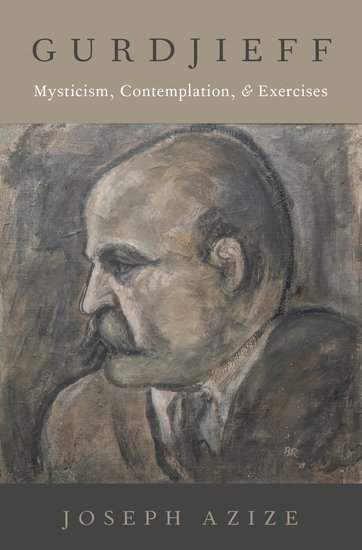 This December the Oxford University Press will be publishing Gurdjieff: Mysticism, Contemplation, and Exercises by Joseph Azize as part of its Oxford Studies in Western Esotericism series. Of course unsubstantiated legend has it that he was not overly fond of the Prophet of the Lovely Star. On the other hand, it’s no secret that King Crimson founder Robert Fripp is a fan boy! The publisher’s site states:

“Studies in The Armenian-born mystic, philosopher, and spiritual teacher G. I. Gurdjieff (c.1866-1949) is an enigmatic figure, the subject of a great deal of interest and speculation, but not easily fitting into any of the common categories of “esoteric,” “occult,” or “New Age.” Scholars have for the most part passed over in silence the contemplative exercises presented in Gurdjieff’s writings. Although Gurdjieff had intended them to be confidential, some of the most important exercises were published posthumously in 1950 and in 1975.

“Arguing that an understanding of these exercises is necessary to fully appreciate Gurdjieff’s contribution to modern esotericism, Joseph Azize offers the first complete study of the exercises and their theoretical foundation. It shows the continuity in Gurdjieff’s teaching, but also the development and change. His original contribution to Western Esotericism lay in his use of tasks, disciplines, and contemplation-like exercises to bring his pupils to a sense of their own presence which could to some extent be maintained in daily life in the social domain, and not only in the secluded conditions typical of meditation. Azize contends that Gurdjieff had initially intended not to use contemplation-like exercises, as he perceived dangers to be associated with these monastic methods, and the religious tradition to be in tension with the secular and supra-denominational guise in which he first couched his teaching. As Gurdjieff adapted the teaching he had found in Eastern monasteries to Western urban and post-religious culture, however, he found it necessary to introduce contemplation.”