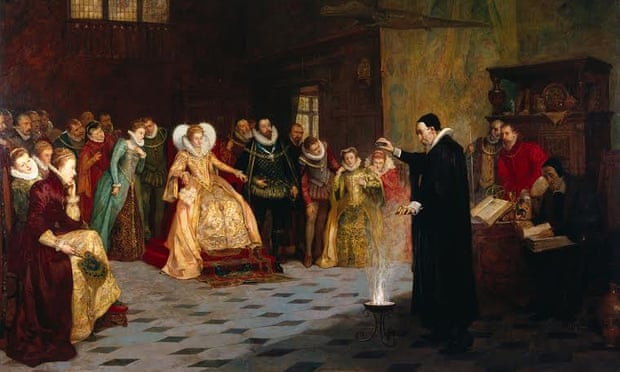 Last month saw the publication of The Anarchy, an account by William Darymple of the history of the East India Company, the most successful capitalist undertaking of its time and possibly of times since. It was a multinational corporation empowered by the British government to operate AS a government in all foreign territories where it could manage to do so, collecting taxes, practicing a monopoly over trade and enforcing its prerogatives via its own military forces. Interestingly, the idea of such a corporate concern was introduced to the British ruler Queen Elizabeth decades before by her court astrologer, Dr. John Dee, the first person on record to use the term  “British Empire” per se.

“From 1570 Dee advocated a policy of political and economic strengthening of England and imperial expansion into the New World.[5] In his manuscript, Brytannicae reipublicae synopsis (1570), he outlined the current state of the Elizabethan Realm[48] and was concerned with trade, ethics and national strength.[5]

“His 1576 General and Rare Memorials pertayning to the Perfect Arte of Navigation was the first volume in an unfinished series planned to advocate the rise of imperial expansion.[49] In the highly symbolic frontispiece, Dee included a figure of Britannia kneeling by the shore beseeching Elizabeth I, to protect her empire by strengthening her navy.[50] Dee used Geoffrey‘s inclusion of Ireland in Arthur’s imperial conquests to argue that Arthur had established a ‘British empire’ abroad.[51] He further argued that England exploit new lands through colonisation and that this vision could become reality through maritime supremacy.[52][53] Dee has been credited with the coining of the term British Empire,[54] however, Humphrey Llwyd has also been credited with the first use of the term in his Commentarioli Britannicae Descriptionis Fragmentum, published eight years earlier in 1568.[55]

“Dee posited a formal claim to North America on the back of a map drawn in 1577–80;[56] he noted Circa 1494 Mr Robert Thorn his father, and Mr Eliot of Bristow, discovered Newfound Land.[57] In his Title Royal of 1580, he invented the claim that Madog ab Owain Gwynedd had discovered America, with the intention of ensuring that England’s claim to the New World was stronger than that of Spain.[58] He further asserted that Brutus of Britain and King Arthur as well as Madog had conquered lands in the Americas and therefore their heir Elizabeth I of England had a priority claim there.[59][60]”

The Guardian ran a review of The Anarchy:

“In August 1765, the East India Company defeated the young Mughal emperor and set up, in his place, a government run by English traders who collected taxes through means of a private army.

“The creation of this new government marked the moment that the East India Company ceased to be a conventional company and became something much more unusual: an international corporation transformed into an aggressive colonial power. Over the course of the next 47 years, the company’s reach grew until almost all of India south of Delhi was effectively ruled from a boardroom in the city of London.

“The Anarchy tells one of history’s most remarkable stories: how the Mughal Empire-which dominated world trade and manufacturing and possessed almost unlimited resources-fell apart and was replaced by a multinational corporation based thousands of miles overseas, and answerable to shareholders, most of whom had never even seen India and no idea about the country whose wealth was providing their dividends. Using previously untapped sources, Dalrymple tells the story of the East India Company as it has never been told before and provides a portrait of the devastating results from the abuse of corporate power.”