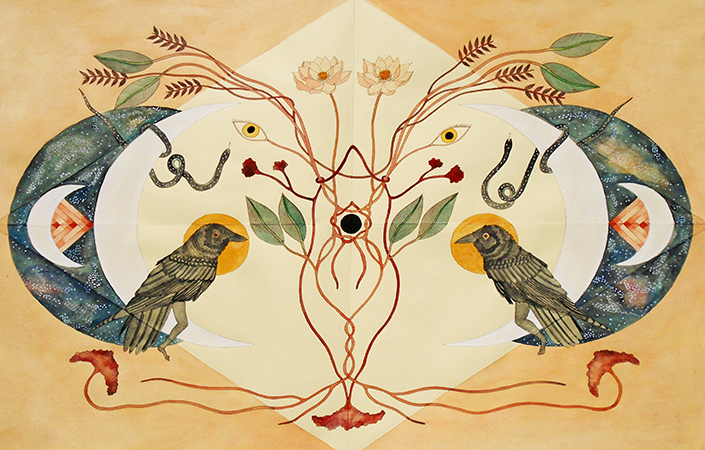 In between the lines of this article on the fabulous Rithika Mercent, unravels the recent surge of interest in Esoteric Art in New York

“Indeed, her work seems part of a centrifuge, as more than a few recent exhibitions have focused on symbology and the occult in the visual arts. I’m thinking of the Marjorie Cameron retrospective at Deitch Projects this past September; the small showing of Steven Arnold’s tableau-vivant photographs at Daniel Cooney Gallery in Chelsea; the recent show of new Mark Ryden paintings at Paul Kasmin Gallery (also Chelsea); and now a pair of group shows spanning the early 20th century to the present.

The first is titled Language of the Birds: Occult and Art, which opens next Tuesday (01/12/16) at the 80WSE Gallery at NYU and features work from more than a century back; these include paintings by neo-paganism’s doyen Aleister Crowley, short films by Kenneth Anger, and paintings by the recently-deceased Paul Laffoley, among others.

The second is Hieroglyphica, currently on view at the Stephen Romano Gallery, in Bushwick, which is paired to a retrospective of watercolors by the American visionary and outsider artist Charles A.A. Dellschau. The latter’s strange blueprints and cryptographs for constructing Wizard of Oz-like aircraft works well with Hieroglyphica, the more trendy of the two current occult-in-art exhibitions (which also happens to feature several works by Rithika Merchant).” –  Ephemera – new york city art and culture

Art Exhibition NYU:  Language of the Birds: Occult and Art