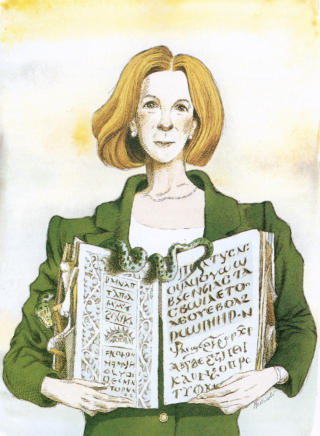 David Tibet recently posted a link to a vintage New Yorker story about theological scholar Elaine Pagels, the personal tragedies that rocked her life and her examination of the emergence of the Devil in Christian ideology. A short excpert reads:

“…Elaine Pagels will publish a new book, “The Origin of Satan.” Characteristically brief and lucid, it is an attempt to describe the evolving shape of the Devil in the sacred Judeo-Christian literature and the rise of demonization, a practice that has haunted two thousand years of history. For Pagels, demonization is a crucial and terrifying component of Christianity. What began as a minority sect’s rhetorical strategy, a way of defining and asserting itself, became a majority religion’s moral, and even psychological, justification for persecution: first of Jews, then of Romans and of heretics—of all opponents, real or imagined.

“Pagels, like many other scholars, begins with the observation that, although all kinds of angels frequent the Hebrew Bible, demonic beings are nearly absent; there are agents of obstruction in the Book of Job and in Numbers, for example, but they are still members of the heavenly court. This changes with the rise of sectarianism. To two first-century Jewish sects—the Essenes (who died out and became a historical curiosity) and the followers of Jesus (who flourished)—figures called, variously, Satan or Belial or Beelzebub, who would shatter the unity of the heavenly court, appear as the great Other in a cosmic war. Pagels outlines the way the four Gospel writers, who probably wrote between the years 60 and 70, just after the Roman destruction of the Temple of Jerusalem and the dispersion of the Jewish people, shaped their stories and imagery to unify the Jewish followers of Jesus. The typology of God and Satan, Us and Them, appears. Although the Gospels tell a story of the moral genius of Jesus—his lessons of charity, redemption, and love—they also tell a parallel story in which the enemies of Jesus threaten tribal unity on earth and are, moreover, “incarnations of Satan. This second story, in which the Gospel writers create a psychology of cosmic war, has influenced the course—the tragic course—of Western history.”