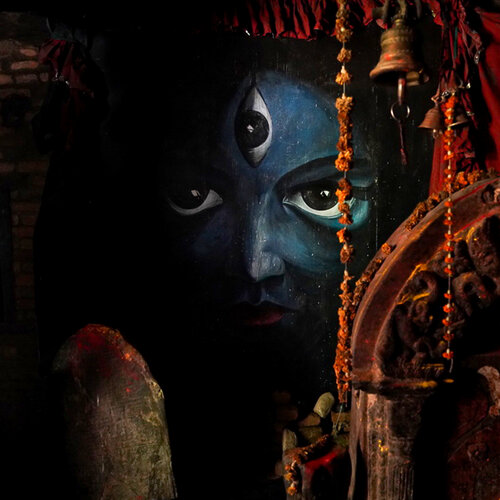 Being a member of a Local O.T.O. Body that was dismissively described as a “Buddhist drinking club” (umm, pretty accurate actually) back in the day, my attention was immediately snagged by details of a newly released film, Looking For a Lady With Fangs and a Moustache wherein the hero searches for a dakini, following the advice of a monk in Kathmandu. WELP! The film’s webpage says:

KATHMANDU, NEPAL: TENZIN (30’s, Tibetan, driven by worldly success) is single-mindedly focused on creating Kathmandu’s first “European style” cafe. While hunting for the perfect location, he visits a long-abandoned temple in the center of Kathmandu, snapping photographs of the ancient sacred art. Later that day, during a music lesson with his closest friend JACHUNG (30’s, Tibetan, hopeless romantic, and devoted Buddhist), Tenzin has a strange vision of a young girl in a poppy field, singing a haunting tune. Jolted back to reality, he pushes the image out of his mind — just a peculiar reaction to stress, he’s sure.

Tenzin awakens to another chilling hallucination, this time of his long-dead sister. He confides in Jachung, who insists that Tenzin seek advice from a notorious Buddhist monk oracle, warning “this could be a bad omen.” Tenzin, a committed atheist, balks at Jachung’s alarm, brushing him off as superstitious.

Tenzin’s visions increase as he stubbornly forges ahead with his cafe plans, finally finding a location in a trendy area of Kathmandu. Convinced his luck has changed, he throws a party to celebrate. When Jachung arrives with the MONK ORACLE (20’s, addicted to his iPad, always in sunglasses) in tow, Tenzin reluctantly agrees to a private audience and relays a detailed account of his visions.

The monk makes a terrifying prediction  —  Tenzin’s visions are a sign that his “life force” is running out, and death is imminent. Unconvinced by the monk’s diagnosis he visits a doctor but is disappointed to discover there is no medical explanation for his visions. Throughout it all, Tenzin tries his best to carry on with day-to-day life. KUNSEL (20’s, a gifted musician and Jachung’s crush) tutors Tenzin and Jachung as they prepare for a performance of the Dramyin (the traditional Himalayan lute beloved by Tenzin’s mother) and development begins at his new cafe. But Tenzin’s visions become more and more frightening. With mystical and magical experiences invading his life, his carefully constructed reality begins to unravel. In desperation, Tenzin visits the monk again, this time prepared to take his advice seriously.

Now the prediction is even more alarming: Tenzin has been cursed, and will certainly die in seven days unless he can find a “dakini” (a mysterious living being — the embodiment of Buddhist teachings on “feminine energy”). The monk sends Tenzin to a BUDDHIST MASTER (60’s, master of the “Left-Hand Lineage” — a grumpy, enlightened sage) who gives specific instructions: When he finds a woman with fangs, a moustache, and perhaps a third eye, he must offer her a gift, of food, tools, shells, or a single shoe. Ideally, if she is a dakini, she will offer him a gift in return but if not, he is instructed to steal something from her. Finally, in order to confirm his discovery, the master gives Tenzin a highly guarded and secret “mudra” (a sacred hand gesture). If the fanged woman is truly a dakini she will understand the mudra and reveal herself. But there is a catch — Tenzin can only safely perform the mudra three times.

Tenzin retreats from everything once important to him — the coffee shop, his business partners, and friends, trolling the Kathmandu streets searching for a dakini. Day after day Tenzin fails and returns to the master for further teachings and advice. On the sixth and final day of his life, a hopeless Tenzin travels to the country to bid farewell to his mother, and on his way back he runs into Kunsel. Viewed in a new light, is it possible that Kunsel, who had been so close this entire time, is the dakini? Finally, suspending all disbelief, he performs the secret mudra for Kunsel but to his dismay, she looks at him in confusion and rushes away. Tenzin continues to wander the streets until he spots another potential dakini in a crowded market. Desperate to save himself in his final hours, he steals the woman’s purse and runs off into the night. Uncertain whether his actions have saved him, he awaits the new day, terrified.

The sun rises on the seventh day, illuminating Tenzin, still alive. Joyous, and with a renewed appreciation for life, he rushes to Jachung’s house and together they find Kunsel to share the good news. As they greet each other, Kunsel shocks Tenzin by performing the secret mudra.

Is Kunsel truly a dakini who saved Tenzin’s life, or was it all an elaborate ruse to force Tenzin into embracing his mystical and religious heritage? Either way, his near-death experience has transformed him forever, from a rational businessman with his head down, to a spiritual seeker with an open heart.