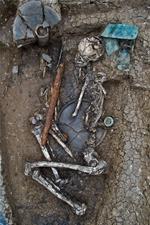 Two headless skeletons and a burial in the form of… a skull are among the discoveries of Georgian-Polish team of archaeologists during excavations in the ancient cemetery Beshtasheni in the region of Lower Kartli, south-eastern Georgia.  In total, during the excavations carried out in the summer, archaeologists discovered and studied sixteen graves of the Late Bronze Age and early Iron Age (XIII-VI century BC). Most of them were covered with stone or soil mounds, or large stone slabs. “The number of discoveries and the richness of the tombs surprised even us – archaeologists. Previous seasons were full of interesting finds, but not in such quantities” – explained in an interview with PAP Jacek Hamburg from the Institute of Archaeology of the University of Warsaw, who led the work of the Polish team. Georgian person responsible for the excavations is Dr. Dimitri Narimanishvili of the Georgian National Museum. Hamburg drew particular attention to the double grave of a man (19-25 years) and a women (23-25 years). Both skeletons were arranged on the right side in a foetal position, next to each other.  Interestingly both deceased persons were buried without their heads. What’s more, after analysing the woman’s skeleton we found two bronze arrowheads in her body – one in the leg and the other under the ribs, near the heart. They could have been the direct cause of her death” – said the researcher.