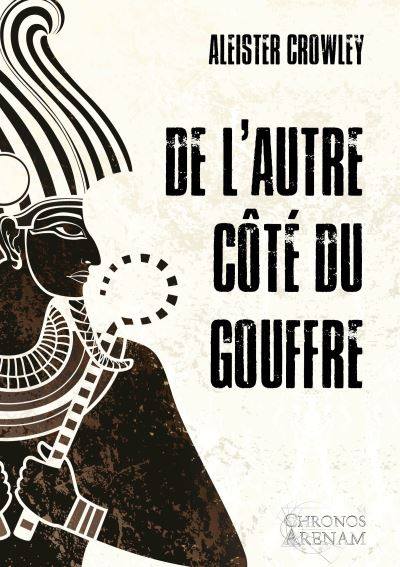 Next month will see the publication of Aleister Crowley’s De L’autre Cote Du Gouffre or Across the Gulf by French aka Liber 59 publisher Chronos Arenam. The NVAC Darty site states:

The British Aleister Crowley (1875-1947), unanimously considered one of the greatest Western wise men of the twentieth century, was also a prophet and advanced the existence of a new cycle of initiation for humanity: the Eon d ‘Horus, initiated in 1904 via his dictated writing in Cairo, the Book of the Law, theophanic document and true literary UFO. For Crowley, humanity was going through phases (“eons”), the eon being conceived as “emanation” of the divinity and temporal segment of about two thousand years). At each of these phases was supposed to correspond a precise initiatory formula. Eon of Isis, eon of Osiris, eon of Horus, followed finally to an eon of Maat. Quadripartite structure based on Egyptian mythology and responding to Hebrew yod-hé-vav-He (Father-Mother-Son-Daughter). A follower of the magical memory, investigator of past lives, he published in 1912 this text in his review The Equinox (Volume I, No. 7), and he will say later that it is “the great story of a previous incarnation. His main interest lies in the fact that his narration of the Isis by Osiris can help the reader understand the meaning of Horus’ setting off of Osiris during the present Eon. “From the Other Side of the Gouffre” or Liber LIX is a publication of the A … A … (Crowley’s prestigious initiatory organization) in Category C, which “deals with nothing less than evocative” .

Pick up your copy: https://livre.fnac.com/a13370416/Alesteir-Crowley-De-l-autre-cote-du-gouffre. Thanks to Brother Joseph for the correction on this!