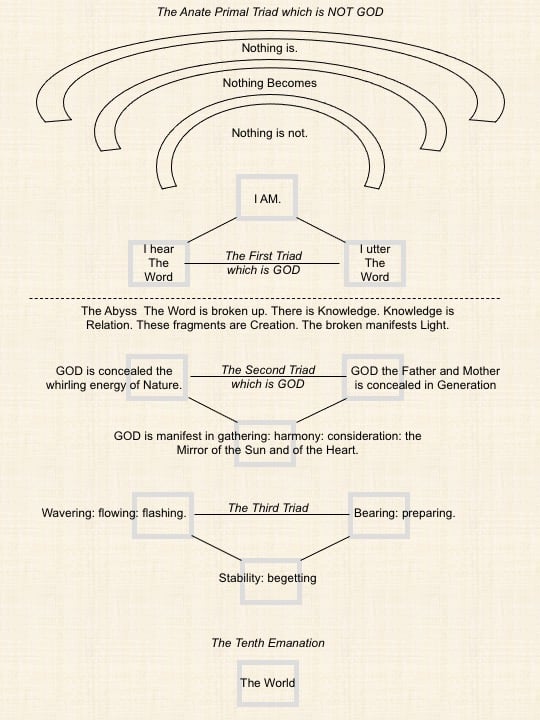 This is copied and pasted from Lon Milo Duquette’s FB page. If you don’t Follow him, YOU SHOULD!
Chapter 0 of The Book of Lies projected on the Tree of Life
COMMENTARY (The Chapter that is not a Chapter)
This chapter, numbered 0, corresponds to the Negative,
which is before Kether in the Qabalistic system.
The notes of interrogation and exclamation on the previous
pages are the other two veils.
The meaning of these symbols is fully explained in “The
Soldier and the Hunchback”.
This chapter begins by the letter O, followed by a mark of
exclamation; its reference to the theogony of “Liber Legis” is
explained in the note, but it also refers to KTEIS PHALLOS
and SPERMA, and is the exclamation of wonder or ecstasy,
which is the ultimate nature of things.
NOTE
(1) Silence. Nuit, O; Hadit; Ra-Hoor-Khuit, I.
COMMENTARY (The Ante Primal Triad)
This is the negative Trinity; its three statements are, in an
ultimate sense, identical. They harmonise Being, Becoming,
Not-Being, the three possible modes of conceiving the universe.
The statement, Nothing is Not , technically equivalent to
Something Is, is fully explained in the essay called Berashith.
The rest of the chapter follows the Sephirotic system of the
Qabalah, and constitutes a sort of quintessential comment upon
that system.
Those familiar with that system will recognise Kether,
Chokmah, Binah, in the First Triad; Daath, in the Abyss; Chesed,
Geburah, Tiphareth, in the Second Triad; Netzach, Hod and
Yesod in the Third Triad, and Malkuth in the Tenth Emanation.
It will be noticed that this cosmogony is very complete; the
manifestation even of God does not appear until Tiphareth; and
the universe itself not until Malkuth.
The chapter many therefore be considered as the most complete
treatise on existence ever written.
NOTE
(2) The Unbroken, absorbing all, is called Darkness.