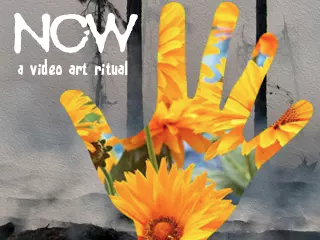 Just came across this IndieGoGo campaign to fund a “video art ritual” that seeks to address “Climate change, polarized politics, increased hate and violence, mass species extinction, gentrification, corporate greed” on a mystical level. The work is being done by Monet Clark (a member of a recent iteration of the seminal psychedelic punk outfit Chrome. Their IGG page states:

“NOW” offers a unique installation experience, casting a sacred and mystical space within six monitors and four projections, including a projection on a pool of water! Coming to the rescue to provide a path through the madness are two over the top, comical, Goddess-like characters who animate “NOW”. The high fashion Valkyrie, medicine woman, Perspicacious and the skeptical, sarcastic haute Goth, Catharsis. Shot in stunning natural landscapes, these two characters are often at odds, yet aligned in their mission to inform, entertain and guide the audience through steps for personal transformation.

“NOW” explores the nexus between technology, the natural world and humanity. It incorporates the idea that the writer and mythologist Joseph Campbell discussed, about an emerging global mythology. It expands upon this concept to include the emergence of a global mysticism, tying ancient practices to modern quantum physics and recent discoveries by DNA scientists.“NOW” embraces the concept that the microcosm affects the macrocosm, and so as we clean up our own internal environment we are also remedying the external one.

“NOW” proposes that each of us matter individually, and together – we are a force!

“NOW” will premiere at SF Camerawork in February 2018; before being exhibited at other venues around the world.

Monet Clark is a performance and video artist. She received her BFA from SFAI and also minored in Holistic Heath at the pioneering department at SFSU. She has trained in mind/body medicine, intuitive and energetic healing, and herbal and vibrational medicine. Her works have exhibited at The Kitchen in NYC; WP8, Dusseldorf, DE; SFMOMA; 18th Street Arts Center, Santa Monica; Krowswork Gallery, Oakland; RETHink Art Digital Festival, Rethymnon, GR; Rapid Pulse, International Performance Art Festival, Chicago; and more. Her recent video “Bunny Girl” (2016), which has shown internationally including with AVIFF Art Film Festival, Cannes, FR uses wry humor to tie environmental degradation to the suppression of the feminine, offering hope for humankind  – in high heels.

John Sanborn is an award-winning media artist whose work has been shown at every major museum in the world, and broadcast worldwide. He has exhibited at the Whitney Museum, MOMA, and the Kitchen in New York; the ICA and Tate Modern in London; and the Centre Pompidou, Videoformes, Bandits Mages and Gallery de L’Angle in France. He has created broadcast work for PBS (“Alive TV”, “Great Performances” and “Sesame Street”), Comedy Central (“Frank Leaves for the Orient”) and  His feature length media works have played at major international festivals including the Tribeca, Sundance, Mill Valley, Rotterdam, New York and London film festivals. He was an artist-in-residence at the celebrated TV Lab at WNET/13 and received grants from the NEA, NYSCA, and the Rockefeller Foundation. Vogue magazine called him “the acknowledged genius in the field”.