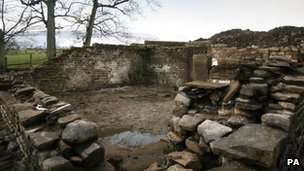 The cottage was discovered near Lower Black Moss reservoir in the village of Barley, in the shadow of Pendle Hill.  Archaeologists brought in by United Utilities to survey the area found the building under a grass mound.  Historians are now speculating that the well-preserved cottage could have belonged to one of the Pendle witches.  The building contained a sealed room, with the bones of a cat bricked into the wall.  It is believed the cat was buried alive to protect the cottage’s inhabitants from evil spirits.