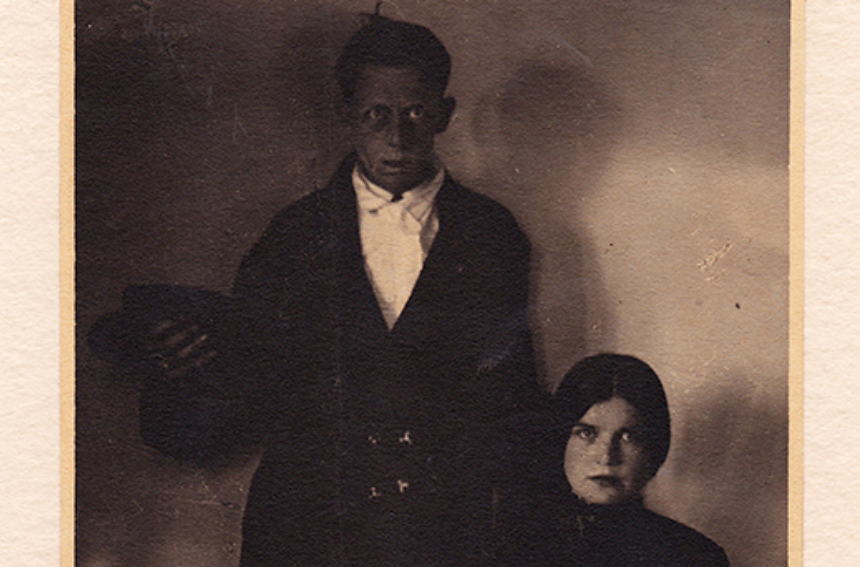 A MULTI-VENUE CELEBRATION OF THE 125TH BIRTHDAY OF AMERICA’S – AND HISTORY’S – GREATEST VISIONARY PHOTOGRAPHIC ARTIST. 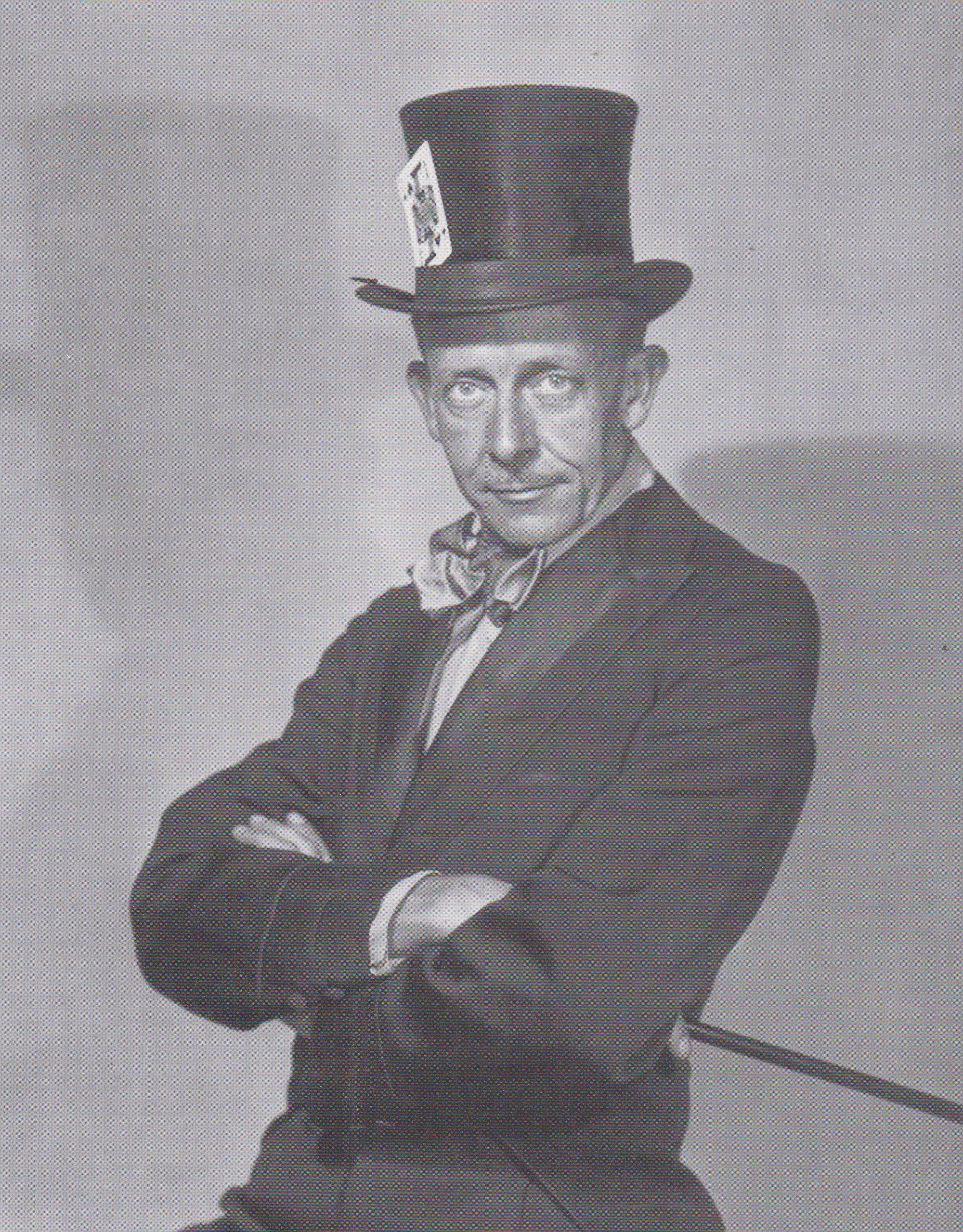 William Mortensen self portrait circa 1940

Venues paying homage include The Heritage Museum of Orange County, curated by Annabella Pritchard, The Buckland Museum of Witchcraft and Magick curated by Steven Intermill, The Gallery of Everything, London, The Museum of Fine Arts, Houston, The Laguna Art Museum, Stephen Romano Gallery, Brooklyn.

William Mortensen (January 27, 1897 – August 12, 1965) was an American photographic artist, who first gained acclaim for his Hollywood portraits in the 1920s in the Pictorialist style and later for viscerally manipulated photography, often touching on themes of the occult. 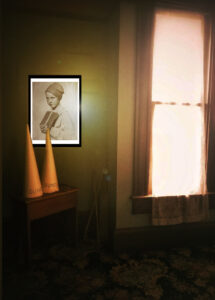 William Mortensen excepted from the series of Marie Antoinette circa 1926. The model is Nancy Cornelius a silent screen actress who has modest success in Hollywood.  The series will be shown in it’s entirety for the first time at the Heritage Museum of Orange County.

William Mortensen “Preparation for the Sabbath” suite The left and right panels were recently discovered along with the center panel, one of Mortensen’s most famous works, together in folder from the estate of the artist’s first wife Courtney Crawford.  The series will be displayed at The Heritage Museum of Orange County’s Maag Farmhouse. 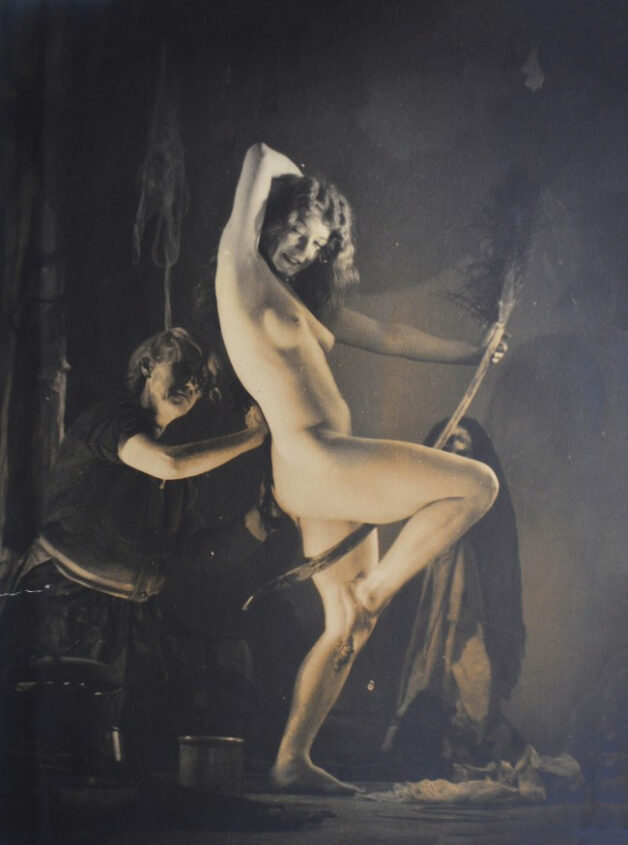 The Buckland Museum of Witchcraft and Magick will mount an exhibition of original works curated by museum director Steven Intermill. This is the second exhibition of Mortensen‘s works the museum has undertaken. Opens January 29 2022. 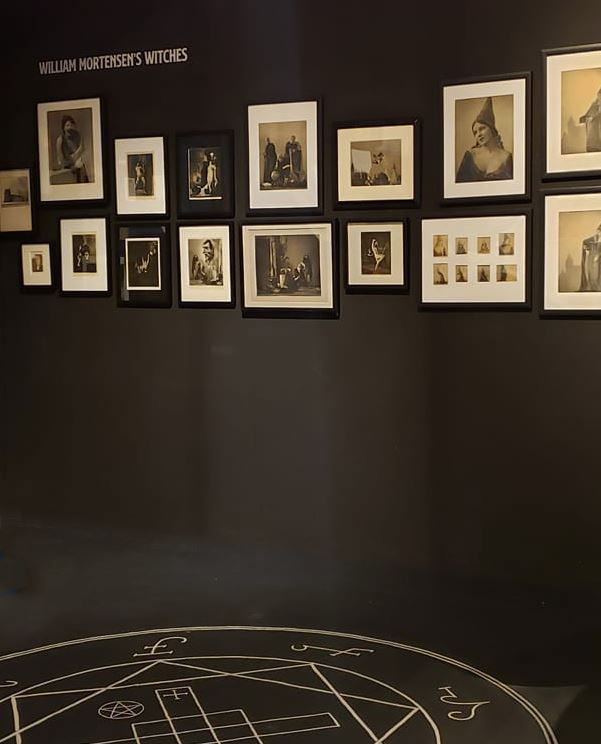 The Gallery of Everything in London will present the series “A Pictorial Compendium of Witchcraft and Demonology” The Museum of Everything has custodianship of one of the most in depth collections of the works of William Mortensen.  Dates TBA. 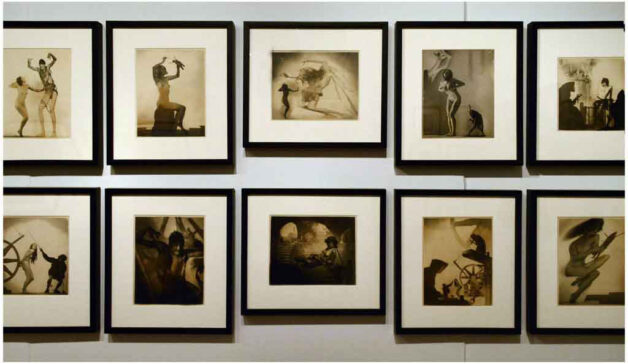 Detail of William Mortensen’s series “A Pictorial Compendium of Witchcraft and Demonology” 1926 courtesy The Gallery of Everything, London

The Museum of Fine Arts, Houston will highlight online their recent acquisition of the William Mortensen handmade book “The King of Kings” which was commissioned by director Cecil B. DeMille.  On view presently.

Works by William Mortensen in The Museum of Fine Arts, Houston. 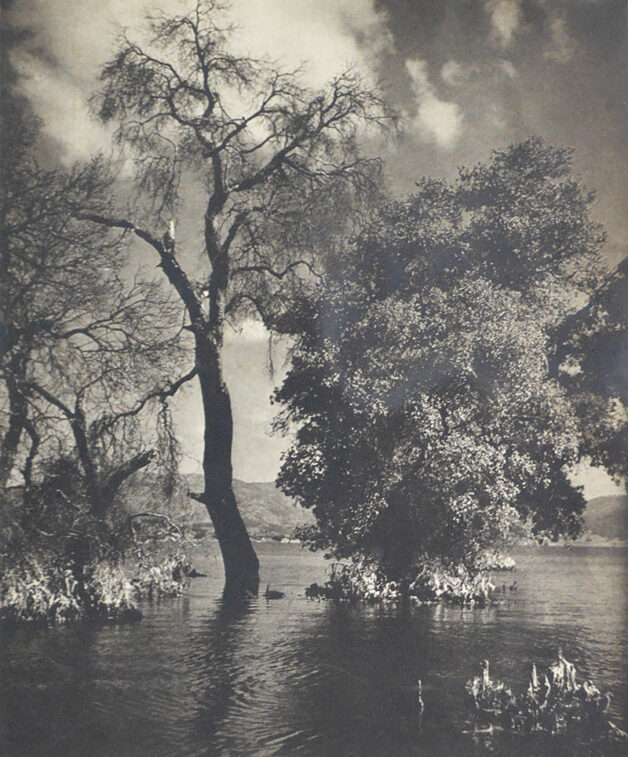 Stephen Romano Gallery in Brooklyn will make a draw for an original William Mortensen photograph on Janaury 27th.  To enter the draw, go to this link and give the post a like. ..  ibit.ly/tsp3 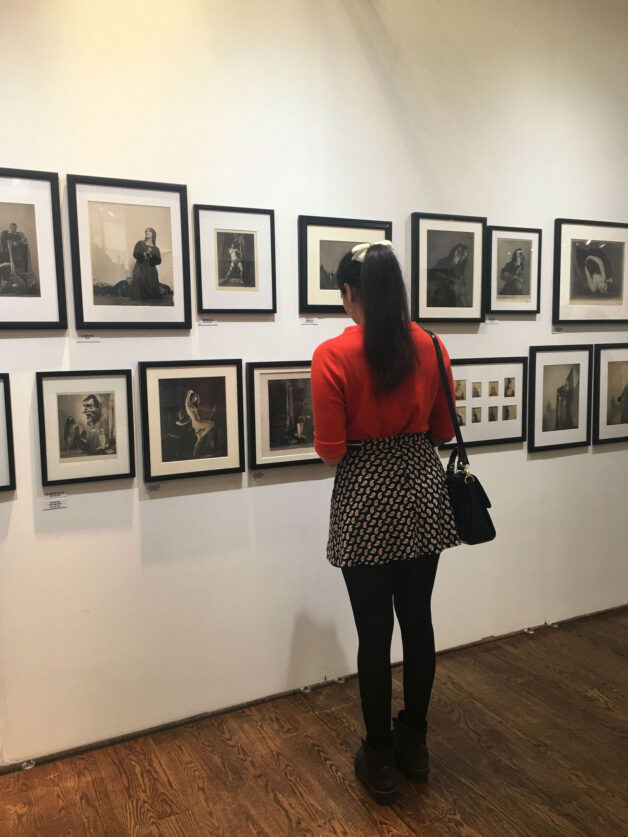 “Thoughts and emotions cannot be photographed, despite the protestations of some mystically minded portraitists. Physical fact is ultimately the sole pictorial material.” -William Mortensen

William Mortensen was born in 1897 in Park City, Utah. His family moved to Salt Lake City when he was 11 years old. He was interested in painting and was trained by his high school teacher, and possibly took lessons before that. He was inducted into the army in 1916 and discharged in 1918. Upon his release from the army, Mortensen spent 1919 and at least part of 1920 in New York City, attending the Arts Students League while there. He traveled to Greece in 1920 and returned the same year. Traveling back to Utah, he took a job teaching art at his alma mater in Salt Lake City. By the end of the school year he left his job at East Side High School, and in 1921 traveled by train escorting a friend’s sister to Hollywood. (The sister was Fay Wray.) 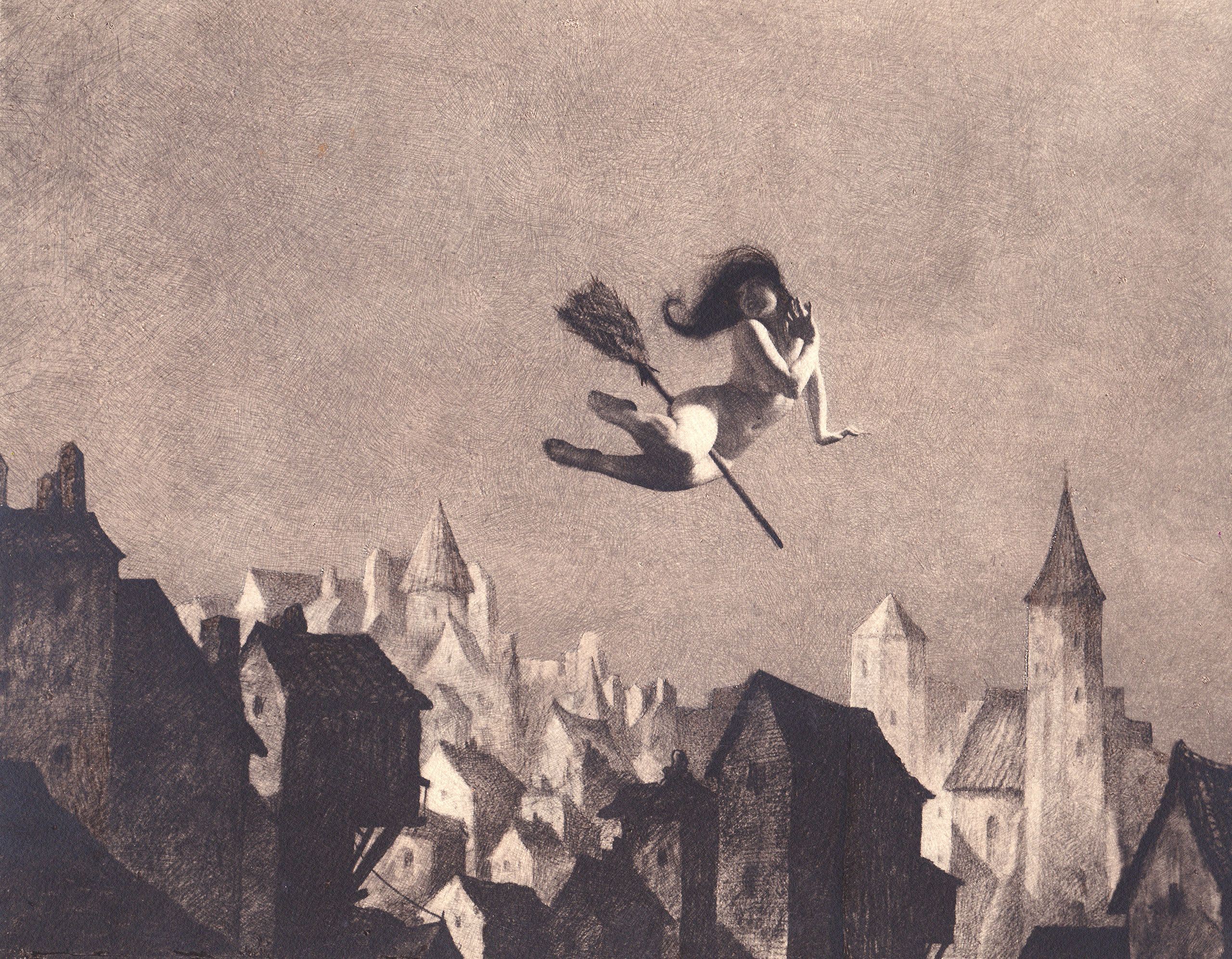 William Mortensen “Ho Ho Off To Sabbath” 1928, from “A Pictorial Compendium of Witchcraft and Demonology”. Full series 👉🏿 here 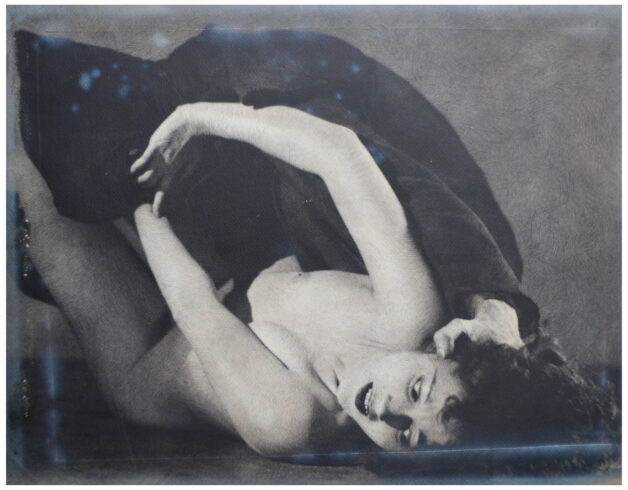 In 1924 he married Courtney Crawford, a librarian, and moved into her home on Hollywood Boulevard, where he maintained a studio from 1925-1931. Also, during this time, he began to enter and show in photographic salons both here and abroad. His work was published in various journals and newspapers, including Photograms of the Year, American Annual of Photography, Vanity Fair, and the Los Angeles Times.

Mortensen moved to Laguna Beach in 1931 and opened a studio on the Pacific Coast Highway. His school, the Mortensen School of Photography, officially opened in 1931 and always occupied the same address as his studio. Over the years, the school enrolled thousands of students from all over the world.

“If tone is granted to be subjected to control, why not line also, which has equal emotional significance? And if line, why not shapes and forms? And if shapes and forms, why not allow elision or emphasis of detail? And if all these things are allowed, what becomes of the record of actuality ?… Sunk without a trace!” – William Mortensen

“Honest artists are made to suffer for the sins of a few pipsqueak pornographers… the official mind seems to follow this highly questionable line of reasoning: some nudes are vile. This is a nude. Therefore, this is vile.”

– William H. Mortensen 1956
In 1933 Mortensen married Myrdith Monaghan and met George Dunham who became a friend and model. More importantly, 1933 is also the year when he began his long writing collaboration with Dunham, which didn’t end until 1960 with an incomplete manuscript titled Composition. The 32-year collaboration yielded 9 books in multiple editions and printings, 4 pamphlets, and over 100 articles in magazines and newspapers. Both Myrdith and Dunham proved to be his most significant models, helping him to produce his most important body of work. The school remained open until a short time after his death from leukemia in 1965. 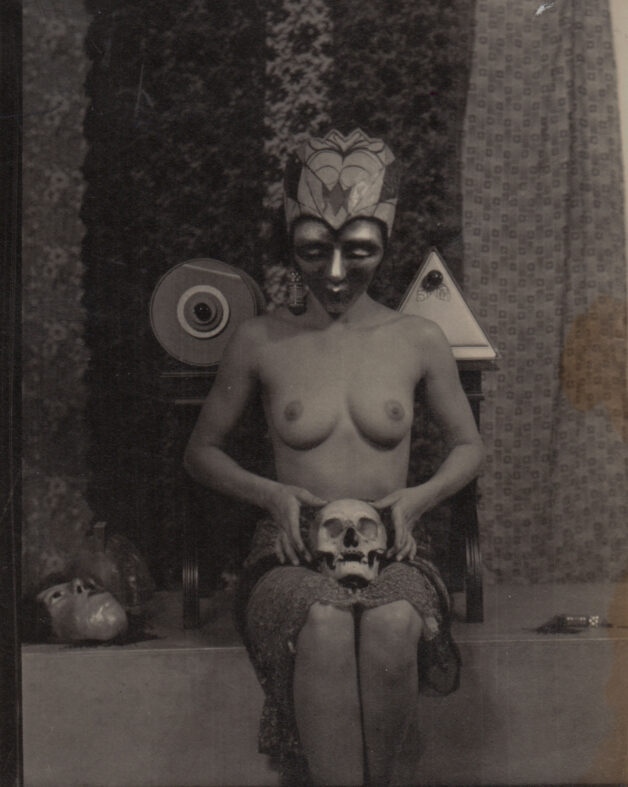 “The word “grotesque” is derived from the same root as “grotto.” Thus the grotesque art is, in its origin, closely connected with the rites of deities that were worshipped underground. Much of this original significance still clings to it. The old, old fears are still with us, despite the braggadocio of our modern learning. Fundamentally we still fear the winged terrors that hover in the darkness, we shrink from the black mystery of the grave. Herein lies the abiding fascination of grotesque art; for we are inevitably drawn by that which we fear, and cannot take our eyes from that which terrorizes us. There are, however, other motives affecting the use of the grotesque in art. One motive, nearly as old as the basic element of fear, is propitiation. By giving a concrete artistic form to the fear that obsesses us—by giving it a definite time and place, so to speak—we are enabled to lessen its power over us. 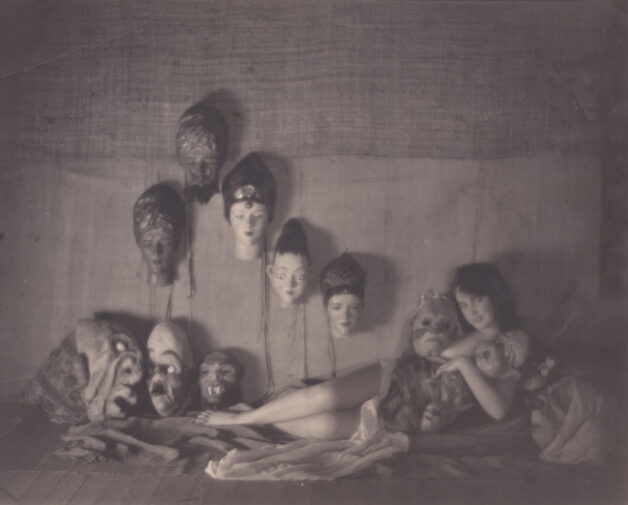 Another important motive in grotesque art is hatred. There is inevitably a close relationship between hatred and fear. So in dealing with that which we hate, we are very apt to turn to the grotesque. 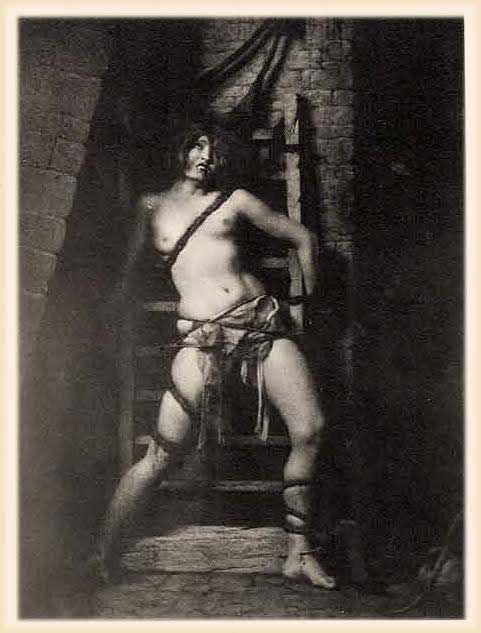 A more sophisticated and modern motive for the grotesque is found in an attitude that we may call “intellectual sadism.” The artist, in other words, enjoys the shock that his pictures inflict on his public. This rather trivial motive, I confess, has encouraged me in my indulgence in the grotesque. I take malicious pleasure in observing the horrified reaction of the innocent spectator as he comes unwarned on a picture that strikes past his guard of polite tolerance. 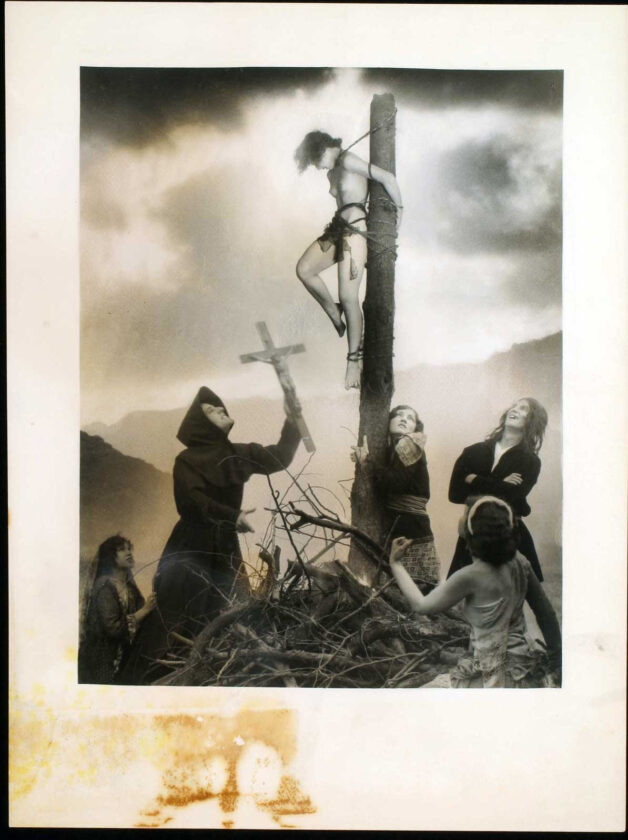 William Mortensen excerpt from “A Pictorial Compendium of Witchcraft and Demonology” 1928 collection of the Museum of Everything, London

A sounder and possibly more dignified motive, and one which contributes much to the modern interest in the grotesque, is the escape which it provides from cramping realism. Realism for its own sake is a blind alley. Photography, owing to the peculiarities of the medium, is made particularly aware of this fact. Photographers who are irked and weary of merely factual reports of everyday people in the everyday world may well turn to the world of the grotesque. When the world of the grotesque is known and appreciated, the real world becomes vastly more significant. We become aware of the dark forces that work behind the curtain of events; the skull suddenly leers at us through the flesh; and we see the exaggerated gesture that lurks behind the most commonplace acts. 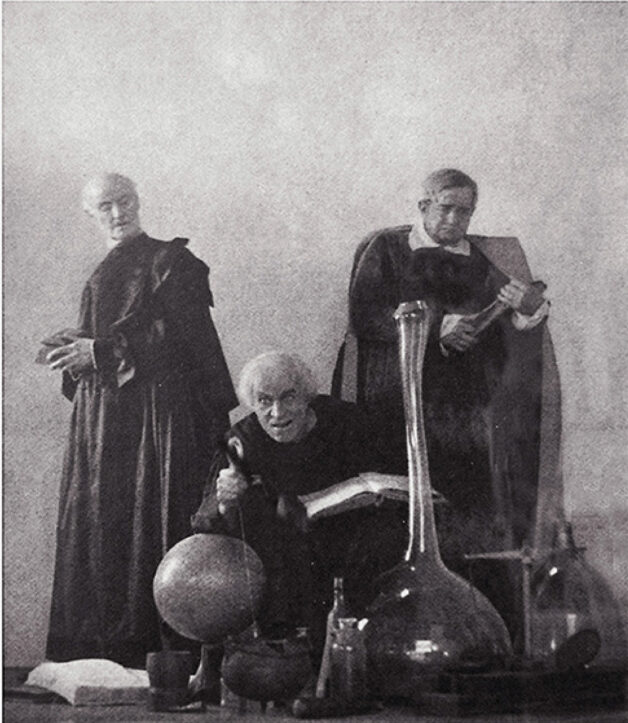 Edgar Allen Poe in his “Tales of the Grotesque and Arabesque” gave a fresh artistic impetus to the use of such material. Neglected or belittled in his own country, his work created in Europe a new school of literary thought. Many excellent examples of modern grotesque art owe their inspiration to his stories. “

– William Mortensen, from “Monsters and Madonnas” 1936 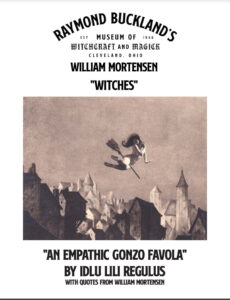 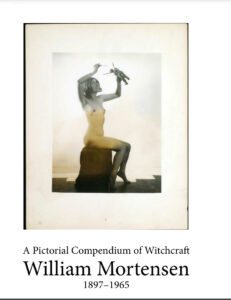 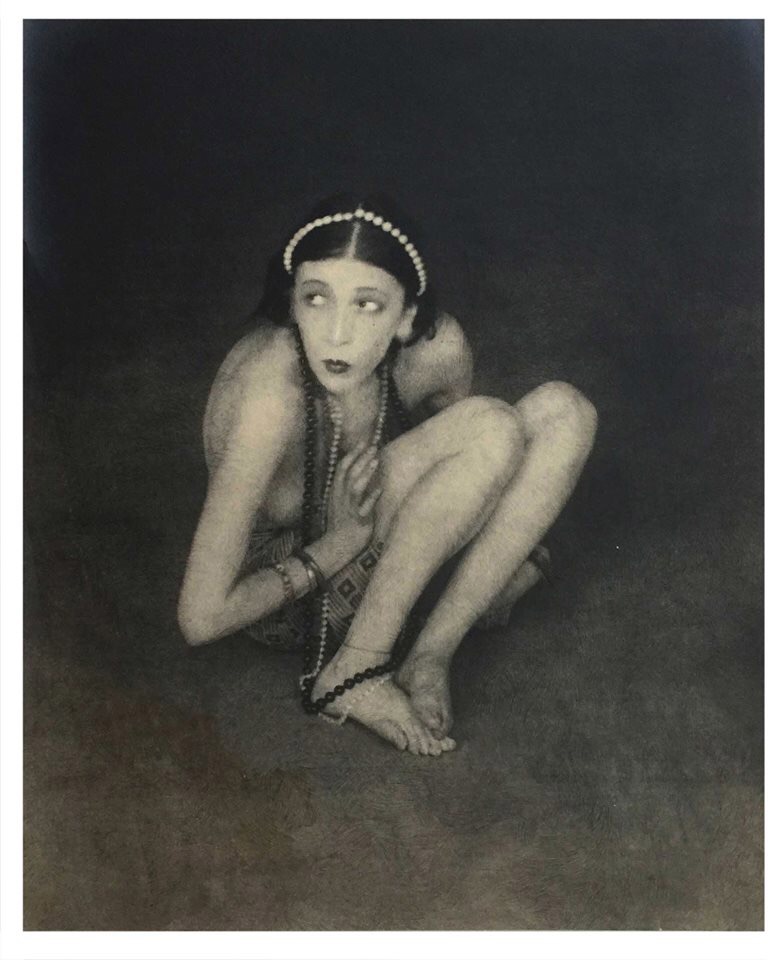 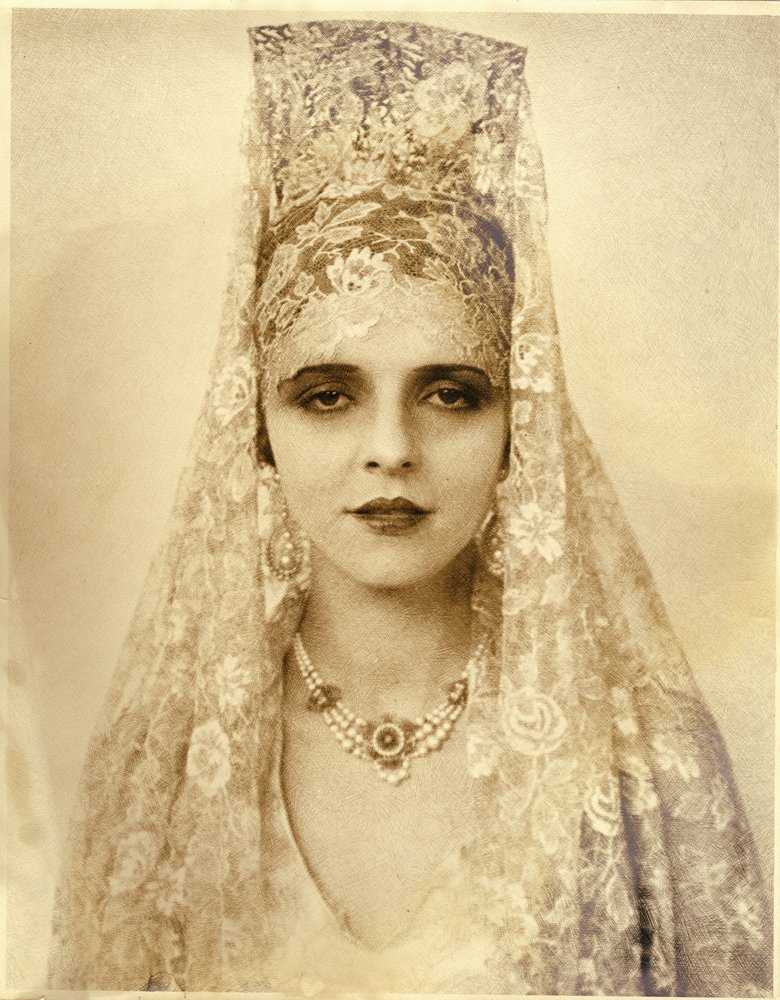 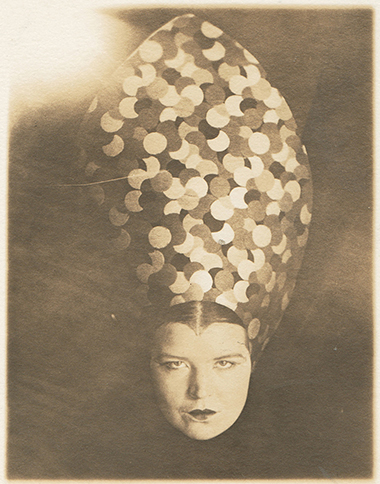 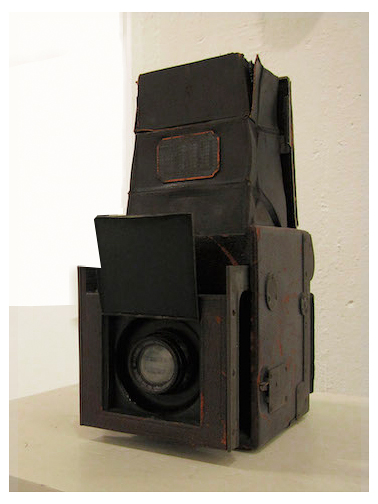 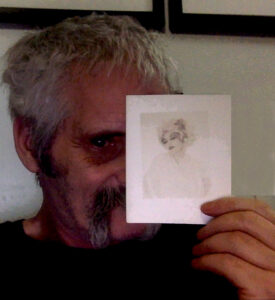 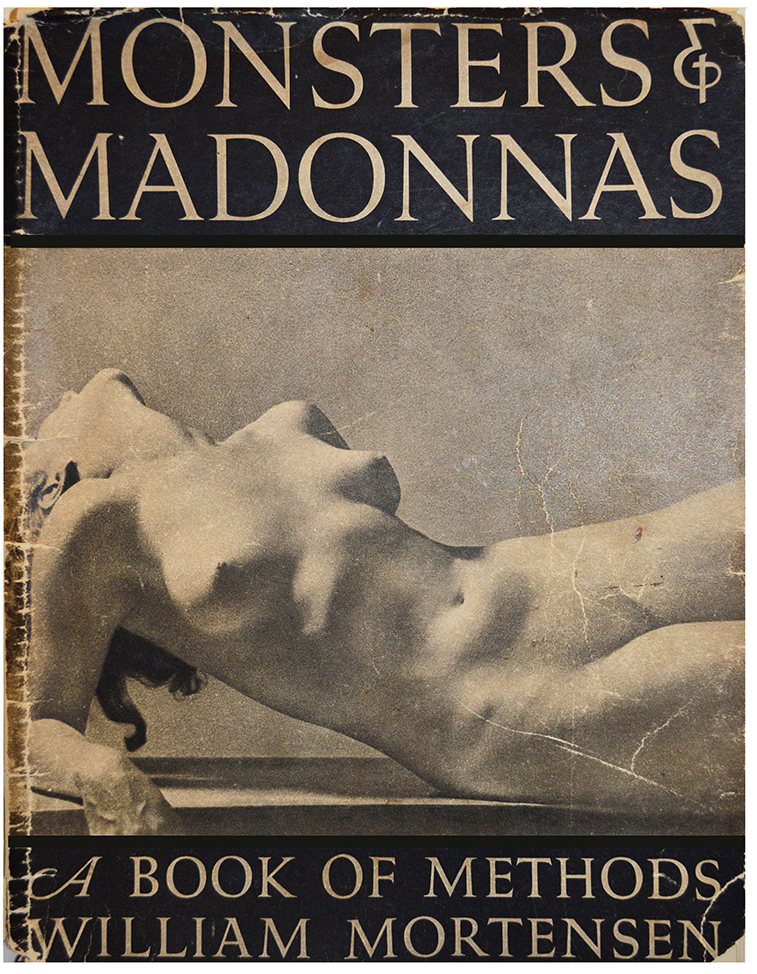 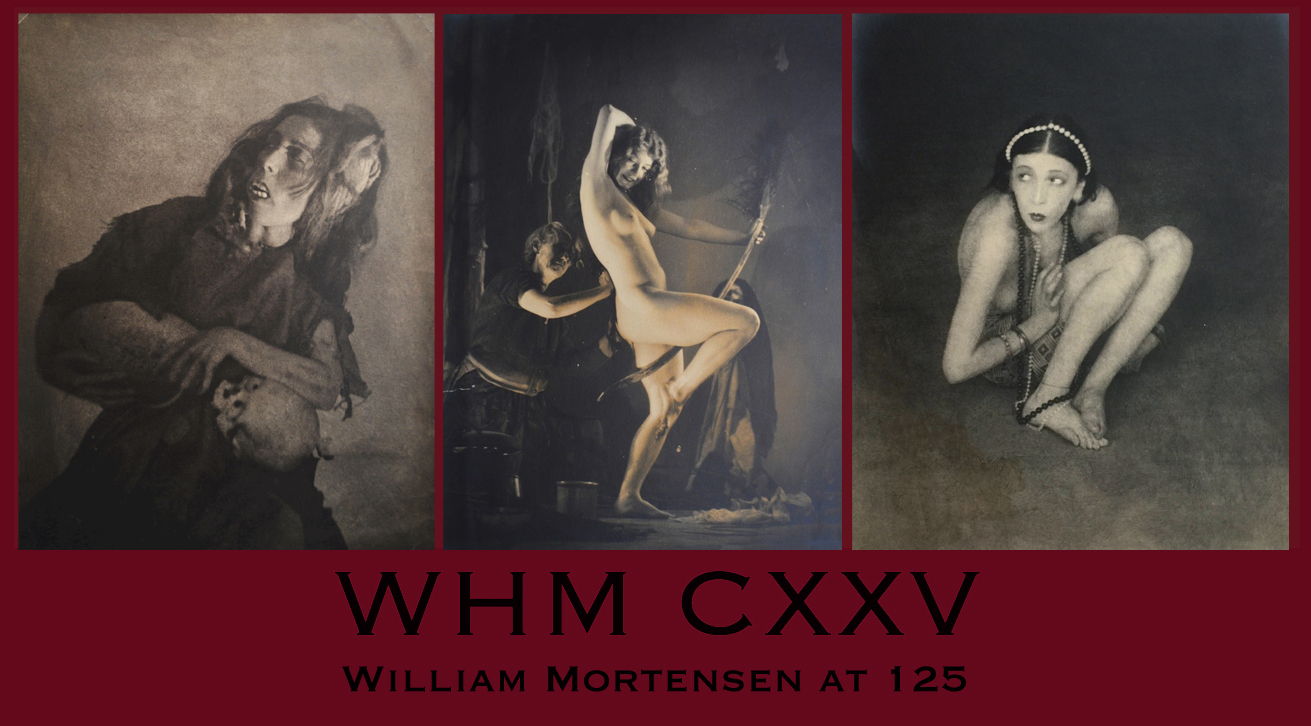