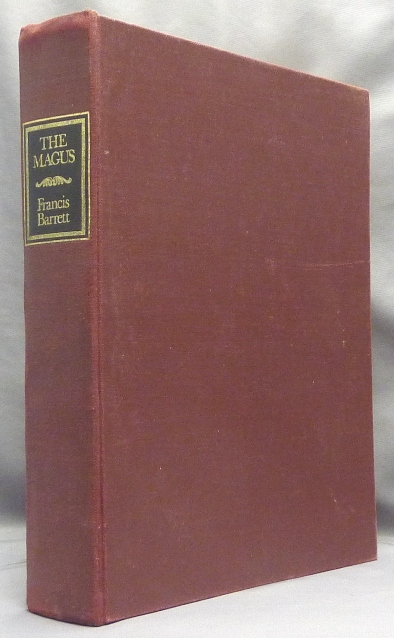 Weiser Antiquarian Booksellers has published Catalogue 260: Alchemy & Hermetica. This stuff sells quick so if ya wanna get in on this… MOVE QUICK! This includes goodies like:

Wellingborough, Northamptonshire, England and New York: Thorsons Publishers Limited and Samuel Weiser Inc., ND [ 1980 ]. Facsimile reprint, Limited to 999 copies. Hardcover. Quarto. xvi + 176pp. + 198pp. Maroon cloth with gilt titling to black spine label. Frontis portrait. Fold-out plate, color & b/w plates. Diagrams. Edition limited to 999 hand numbered copies, published jointly by Thorson’s Publishers (UK) and Samuel Weiser Publishing (US) in 1980. Facsimile reprint of the first (1801) edition of Barrett’s magical treatise. It was perhaps the most important & influential early nineteenth century work on Western occultism, with chapters on alchemy, the Kabbalah, talismanic magic, ceremonial magic etc. etc. Numerous engravings in text and plates of Kabbalistic and astrological tables (some fold-out), magical equipment, etc. including some colour plates (mostly of demons). The work played an important part in inspiring the nineteenth century occult revival, and its influence can be seen in the studies of the Eliphas Levi, the Hermetic Order of the Golden Dawn, Aleister Crowley, et al. Boards rubbed and bowed (as can be common in this edition), a couple of scratches to front board, a few faint spots to cloth, spine ends and edges a little rubbed and bruised. A few spots of browning to page edges, pages lightly toned but clean and unmarked. Overall a clean unmarked VG copy (no dust jacket issued). Uncommon edition. Large heavy volume – will require additional shipping to that automatically quoted. Item #68123
ISBN: 0722504098