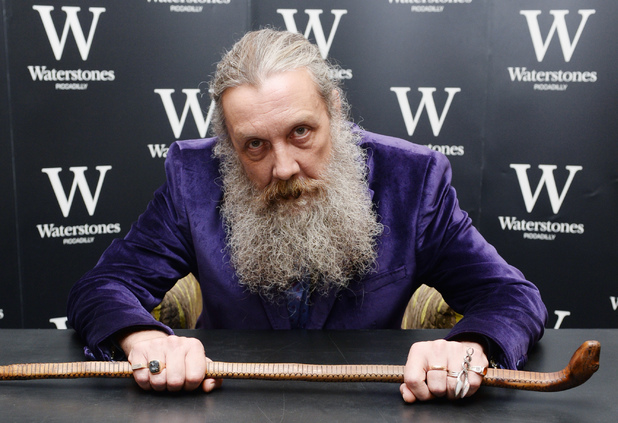 Alan Moore has publicly disparaged all the film and TV adaptations of his work and not deliberately written a feature film. Now he has, The Show. Polygon.com reports:

“That changes with The Show. A continuation of a short film series he began with director Mitch Jenkins, the film stars actor Tom Burke (The Souvenir) as Fletcher Dennis, ‘a man of many talents, passports, and identities.’ Ellie Bamber, Siobhan Hewlett, Sheila Atim, and Moore himself round out the cast. The trailer for The Show feels imbued with the psychedelic mysticism that’s wound around Moore’s later work, for better or worse.”

Here’s the text posted with the trailer:

“We’ve saved you the best seat in the house”. Watch the trailer for THE SHOW. From the mind of Alan Moore comes a new feature film directed by Mitch Jenkins starring Tom Burke, Siobhan Hewlett, Alan Moore, Ellie Bamber, Darrell D’Silva, Richard Dillane, Christopher Fairbank, and Sheila Atim. • Official selection 53 Sitges Festival Internacional de Cinema Fantàstic de Catalunya • Official selection 2020 SXSW Film Festival A frighteningly focussed man of many talents, passports and identities arrives at England’s broken heart, a haunted midlands town that has collapsed to a black hole of dreams, only to find that this new territory is as at least as strange and dangerous as he is. Attempting to locate a certain person and a certain artefact for his insistent client, he finds himself sinking in a quicksand twilight world of dead Lotharios, comatose sleeping beauties, Voodoo gangsters, masked adventurers, unlikely 1930s private eyes and violent chiaroscuro women…and this is Northampton when it’s still awake. Once the town closes its eyes there is another world entirely going on beneath the twitching lids, a world of glittering and sinister delirium much worse than any social or economic devastation. Welcome to the British nightmare, with its gorgeous flesh, its tinsel and its luminous light-entertainment monsters; its hallucinatory austerity. The trailer contains an edit of the track Bloodrush by Andrew Broder featuring Denzel Curry. Follow The Show on Instagram https://www.instagram.com/theshow_off… Subscribe to The Show and Lex Film Updates – https://theshow.lnk.to/Subscribe