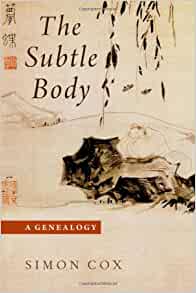 Somehow we missed the late 2021 publication of The Subtle Body A Genealogy Simon Cox, part of the Oxford Studies in Western Esotericism series. Making it right now.

“How does the soul relate to the body? Through the ages, innumerable religious and intellectual movements have proposed answers to this question. Many have gravitated to the notion of the “subtle body,” positing some sort of subtle entity that is neither soul nor body, but some mixture of the two. Simon Cox traces the history of this idea from the late Roman Empire to the present day, touching on how philosophers, wizards, scholars, occultists, psychologists, and mystics have engaged with the idea over the past two thousand years.

“This study is an intellectual history of the subtle body concept from its origins in late antiquity through the Renaissance into the Euro-American counterculture of the 1960’s and 70’s. It begins with a prehistory of the idea, rooted as it is in third-century Neoplatonism. It then proceeds to the signifier “subtle body” in its earliest English uses amongst the Cambridge Platonists. After that, it looks forward to those Orientalist fathers of Indology, who, in their earliest translations of Sanskrit philosophy relied heavily on the Cambridge Platonist lexicon, and thereby brought Indian philosophy into what had hitherto been a distinctly platonic discourse. At this point, the story takes a little reflexive stroll into the source of the author’s own interest in this strange concept, looking at Helena Blavatsky and the Theosophical import, expression, and popularization of the concept. Cox then zeroes in on Aleister Crowley, focusing on the subtle body in fin de siècle occultism. Finally, he turns to Carl Jung, his colleague Frederic Spiegelberg, and the popularization of the idea of the subtle body in the Euro-American counterculture. This book is for anyone interested in yogic, somatic, or energetic practices, and will be very useful to scholars and area specialists who rely on this term in dealing with Hindu, Daoist, and Buddhist texts.”