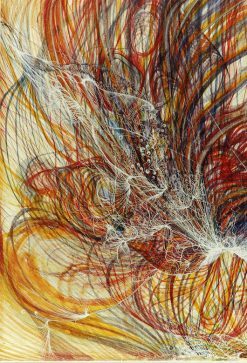 Overlooked painter is becoming recognised as being decades ahead of abstract pioneers such as Wassily Kandinsky.

She has been dismissed as an eccentric, amateur artist who claimed to talk to the dead and receive their help with her watercolours. But Georgiana Houghton’s abstract style is beginning to be recognised as being decades ahead of painters in a similar vein such as Wassily Kandinsky and Piet Mondrian. Now the fascinating story of the overlooked Victorian artist is to be told in the first UK exhibition of Houghton’s work in nearly 150 years.

It will be presented next month at the Courthauld Gallery in London. The gallery’s curator of 20th-century art, Barnaby Wright, said Houghton’s works were extraordinary and pre-dated works by artists considered abstract pioneers by some 40 years. They are also ahead of works by the Swedish artist Hilma af Klint whose turn-of-the-century abstract works are on display at the Serpentine Gallery in London.

See full article in The Guardian

note: [Last year I had the opportunity to see an exhibition of the Spiritualist artist Georgiana Houghton being exhibited in Melbourne Australia at the ‘Monash Univeristy Museum of Art’ curated Marco Pasi and Lars Bang Larsen Bang who have now teamed up with Simon Grant to bring the exhibition to the UK at The Courtauld Galley. I highly recommend this remarkable show. BWH ]

Exhibition details at the Cortauld Gallery below