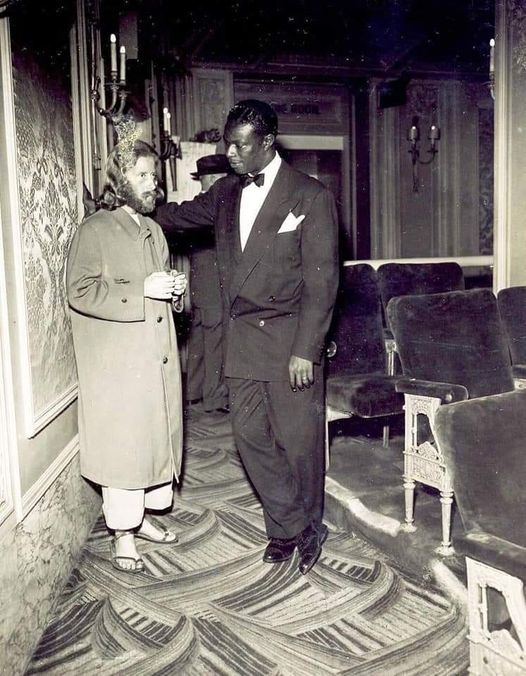 Years ago,  O.T.O. Deputy National Grand Master, Lon Milo Duquette, gave a lovely talk at a NOTOCON (Seattle?) that essentially revolved around mystic experience and the denouement of the talk was his performance of the quirky Jazz standard “Nature Boy,” which was introduced with a short description of the song’s unlikely provenance. Here’s a longer look at this matter, discussing the song’s composer and his extraordinary background and an account of how he bestowed the song on Nat King Cole, giving him his first mega-hit; this was posted by Michael DeVore, https://www.facebook.com/michaeldevore88

The strange encounter of Nat King Cole with Eden Ahbez
“In the late 40s, there was a rumor that there was a “hermit,” disenchanted and disillusioned with the world, supposedly “out-of-sync” with society, living in California in a cave under one of the L’s in the Hollywood sign.
No one really cared about this strange man, until one night in 1947, when someone tried to enter backstage at the Lincoln Theater in Los Angeles. Nat King Cole was playing there, and the man said he had something for Cole.
Of course, the employees didn’t let the strange man see Cole, so he gave whatever he had with Cole’s manager.
What he had was a song sheet, which Cole would later take a look at. Cole liked the song and wanted to record it, but he had to find the strange man. When asked, the people who saw the man said he was strange, indeed, with shoulder-length hair and beard, wearing sandals and a white robe.
Cole finally tracked him down in New York City. When Cole asked him where he was staying, the strange man declared he was staying at the best hotel in New York – outside, literally, in Central Park. He said his name was eden ahbez (spelled all in lower-case letters). The song he gave Cole was titled, “Nature Boy.” It became Cole’s first big hit, and was soon covered by other artists through the years, from Frank Sinatra and Sarah Vaughan to Tony Bennett and Lady Gaga, most recently.
Of course, the media went crazy about the strange, mysterious man who handed Nat King Cole, one of the biggest hits during that time. Everyone went out to try to find out more about him.
What little they found was that he was once an orphan, who never stayed at one place very long, living in various foster homes. He explained he just never fit in and was always searching, for something.
[“They say he wandered very far…
Very far, over land and sea…”
They found out he would hop freight trains and walked across country several times, subsisting solely on raw fruits and vegetables, then one day he completely vanished.
[“A little shy and sad of eye…
But very wise was he…”]
He finally showed up again in the Hollywood hills. When a policeman stopped the strange, long-haired man with beard, sandals, and robe, ahbez simply replied, “I look crazy but I’m not. And the funny thing is that other people don’t look crazy but they are.”
[“And then one day…
One magic day he passed my way…”]
He then showed up backstage at Nat King Cole’s concert in Los Angeles, to present him with the song, “Nature Boy.” No one seems to really know why he selected Cole, there were some rumors that he came out of hiding when he began to hear about the racism going on and trouble throughout the world, and he thought “King” was the best person at that time to pass his message along.
[“While we spoke of many things…
Fools and Kings…”]
When he was asked about racism, he replied, “Some white people hate black people, and some white people love black people, some black people hate white people, and some black people love white people. So you see it’s not an issue of black and white, it’s an issue of Lovers and Haters.”
It was that theme of love that he continued to talk about, what was missing in the world, and what would be needed in the future if we are to survive.
ahbez would eventually get his message out, especially after the counter-culture finally caught up with him and the hippie movement began, when other artists such as Donovan, Grace Slick, and the Beach Boys’ Brian Wilson sought him out. He also wrote songs for Eartha Kitt and had another song recorded by Sam Cooke.
In 2009, Congressman Bill Aswad recited the last lyrics of the song before the Vermont House of Representatives at the passing of his state’s same-sex marriage bill in ’09.
Author Raymond Knapp described the track as a “mystically charged vagabond song” whose lyrics evoked an intense sense of loss and haplessness, with the final line delivering a universal truth, described by Knapp as “indestructible” and “salvaged somehow from the perilous journey of life.”
[“This he said to me…
The greatest thing you’ll ever learn…
Is just to love and be loved in return.”]

“George Alexander Aberle (April 15, 1908 – March 4, 1995), known as eden ahbez, was an American songwriter and recording artist of the 1940s to 1960s, whose lifestyle in California was influential in the hippie movement.
He was known to friends simply as ahbe.
Ahbez composed the song “Nature Boy”, which became a No. 1 hit for eight weeks in 1948 for Nat “King” Cole.
Living a bucolic life from at least the 1940s, he traveled in sandals and wore shoulder-length hair and beard, and white robes. He camped out below the first L in the Hollywood Sign above Los Angeles and studied Oriental mysticism. He slept outdoors with his family and ate vegetables, fruits, and nuts. He claimed to live on three dollars per week.
In the mid 1950s, he wrote songs for Eartha Kitt, Frankie Laine, and others, as well as writing some rock-and-roll novelty songs. In 1957, his song “Lonely Island” was recorded by Sam Cooke, becoming the second and final Ahbez composition to hit the Top 40.
In 1959, he began recording instrumental music, which combined his signature somber tones with exotic arrangements and (according to the record sleeve) “primitive rhythms”. He often performed bongo, flute, and poetry gigs at beat coffeehouses in the Los Angeles area. In 1960, he recorded his only solo LP, Eden’s Island, for Del-Fi Records. This mixed beatnik poetry with exotica arrangements. Ahbez promoted the album through a coast-to-coast walking tour making personal appearances, but it sold poorly.
During the 1960s, ahbez released five singles. Grace Slick’s band, the Great Society, recorded a version of “Nature Boy” in 1966 and ahbez was photographed in the studio with Brian Wilson during a session for the Smile album in early 1967. Later that year, British singer Donovan sought out ahbez in Palm Springs, and the two wanderers shared a reportedly “near-telepathic” conversation. In the 1970s, Big Star’s Alex Chilton recorded a version of “Nature Boy” with the photographer William Eggleston on piano. The song was finally released as a bonus track on the 1992 Rykodisc re-release of the album Third/Sister Lovers.
In 1974, ahbez was reported to be living in the Los Angeles suburb of Sunland, and he owned a record label named Sunland Records, for which he was recording under the name “Eden Abba.” From the late 1980s until his death, ahbez worked closely with Joe Romersa, an engineer/drummer in Los Angeles. The master tapes, photos, and final works of eden ahbez are in Romersa’s possession.
Ahbez died on March 4, 1995, of injuries sustained in a car accident, at the age of 86. Another album, Echoes from Nature Boy, was released posthumously.”
here’s a previous blog post about this gent’s strange and wonderful life: https://zeroequalstwo.net/the-mystical-composer-of-jazz-standard-nature-boy/ 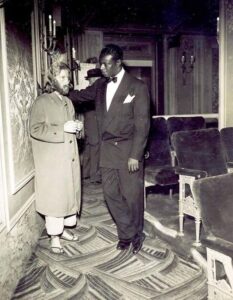