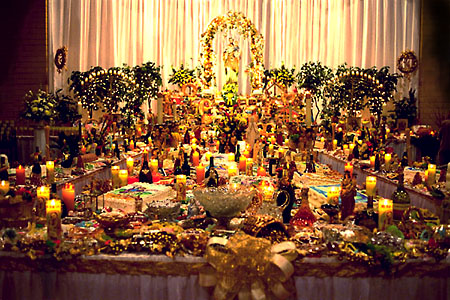 That House, my refuge, and the table Thou hast laid for me — O food to nourish the deepest, O wine to intoxicate the inmost! Thou has spread the banquet, and I shall feast thereupon until the shadows flee away, in Thine everlasting Glory.

Mine heart is uplifted in me, and the serpent flame therein; I shall get me to the House of the Beloved.

We say these lines nightly from March 20 through April 10 at Leaping Laughter’s Office of the Readings, presented annually by Scott Stenwick. The “House of the Beloved” and the getting of me thereunto is a not-very subtle reference to the accomplishment of the Knowledge and Conversation with your Holy Guardian Angel. The rest of the Preliminary Litany makes it pretty clear who the Beloved is, and why unto their house me would want to get.

Now, I’ve done a lot of research into the Holy Guardian Angel (HGA), and have traced this entity as it has manifested in various western cultures back through time to the Zoroastrians. As long as humans have looked to occult forces, they’ve had an entity who does what the HGA does in modern Thelemic practices. Assuming this is the HGA taking on the masks best suited to its time, as it is described as doing in the Abramelin text, it’s pretty safe to say the obtaining of a spirit familiar has long been the primary goal of the magician.

In the Greek Magical Papyri, there is a ritual designed to obtain the “Supernatural Assistant.”  In this ritual, one of the primary tasks of the Supernatural Assistant is to put the magician in touch with the spirits who can accomplish their Will. Much like Scirlin in the True Grimoire, the Supernatural Assistant is your local guide who knows all the hangouts and skill sets of the tribes and clans of the spiritual world. He is your ambassador to all the other spirits that exist. He knows their language, their preferred offerings, the hours and days to summon them, their ambitions in existence, their enemies, and the things they really like to eat.

People don’t think about it often, but apparently the spiritual tribes of angels, elemental spirits, subterranean entities, and the cosmic hoardes that lie in the trans-Saturnian spheres far from our realms on Earth like to eat. And chances are, you don’t know what is a delicacy to Shub Nigurrath, or what would make Raziel’s choirs retch for a week, as they hymn their silent hymns silently, just waiting to get you back for that.

So the Supernatural Assistant has your back:

And when you want to give a [dinner], tell him so. Conjure up in your mind any suitable room and order him to prepare it for a banquet quickly and without delay.  At once he will bestow chambers with golden ceilings, and you will see their walls covered with marble — and you consider these things partly real / and partly just illusionary — and costly wine, as is meet to cap a dinner splendidly.  He will quickly bring daimons, and for you he will adorn these servants with sashes.

So along with everything else, the HGA is the Chef to the Gods. Don’t forget when conjuring spirits to ask your HGA to lay out a feast for them. It makes them a lot more inclined to acquiesce to your requests.