Aeon Sophia Press have announced the 2023 publication of The Grimoire of the 72 Angels of the Shemhamphorash by Qirui Huo. Pre-orders have now opened. The posted descriptions says”
“This book contains the complete transcript of the three magic manuscripts as regards the 72 Angels. It includes The Divine Cabal, The Book of the Cabala ie Lemoth or of Names, and The Schem-ham-maphora. These manuscripts were originally written by Lazare Lenain and copied & translated by Frederick Hockley between 1840-1841. Besides the transcription, massive comparative annotation on relevant manuscripts are appended as well.
“Qirui Huo is an author from China, and an occultist and teacher, mainly studying in the field of Ceremonial Magic, Grimoire Tradition, especially Solomonic Magic, Angelic Magic, etc. In recent years, he spread Western occultism in China through lectures, articles, and books. he has also cooperated with other Occult authors transnationally by means of providing important manuscript materials or co-publishing magic books with them.
“The Grimoire of the 72 Angels of the Shemhamphorash will be published in three versions, being a Standard Edition limited to 300 copies, a Deluxe Edition limited to 50 copies and a special hand made Devotee Edition limited to only 13 copies.”
More info and pre-order via this link:
https://www.aeonsophiapress.com/…/cat1293622_3946076.aspx
Estimate release date for the Standard and Deluxe Editions is in February/March 2023.
Book specifications (of the Standard Editions):
– Linen bound hardcover
– Gold foil title + sigil printed to the front cover
– Gold foil title lettering printed to the spine
– 90 grams paper soft-tone off-white bookblock
– Full color printed internal layout design and illustrations
– 293 Pages total
– Head & tail bands
– Rounded spine finished
– Black end-papers
– Strictly limited edition to 300 copies total of the Standard editions
– Each copy will be hand numbered 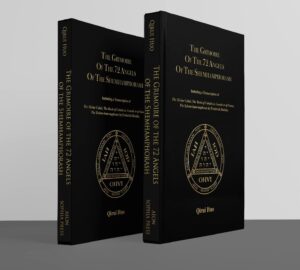