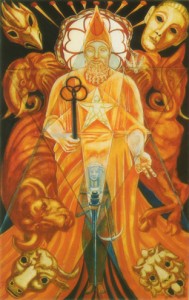 It should be noted that this idea is all mine, lots of people in the O.T.O. and E.G.C. will likely hate it, and it is not in any way an officially supported idea by anyone in the Order other than myself, and I’m nobody.

But I bet your King will dig it if it works.

So here’s the basic idea, in three-part harmony:

I’d like to have a local E.G.C. body in the Kingdom of the United States that has over 10,000 members. They don’t all have to be O.T.O. members, they just need to be working through Baptism, Confirmation, and get something out of the Gnostic Mass on a regular basis. Ideally, they would join the O.T.O. as those who are called to serve are interested, but it shouldn’t be for everyone.

I don’t know how to make this happen globally, but I’ve got a plan to grow our local body. I’d like to double membership in a year, and then continue to do so until we’re so big and rich that we have masses at the stadium downtown just so we have enough room for everyone.

And why would I want to do something like this? Basically, let’s face it, if what we are doing as Thelemites is real, it’s really real. That means THELEMA is the Word of the Aeon, and we are living in the Aeon of the Crowned and Conquering Child. Crowley left the A.’.A.’., the O.T.O., and the E.G.C. to provide a way to channel the Word into the world, and provided a way to train people to shift from the old aeon to the next, through studies and practices that change them and their worlds for the better.

Everyone on the planet isn’t going to be interested in becoming a Magician, but everyone on the planet, whether they know it or not, are being called to accomplish their True Will, the Great Work, the Summum Bonum. They might not be interested in the Tree of Life, its paths and spheres, but the Mass will provide something that answers questions they don’t even know they’re asking. That’s what it’s for. Some will join the other Orders, some will just hang out and drink wine.

All of them will donate something, sometime.

Specifically, I want to call out Hidden Spring, William Blake, Scarlet Woman, and of course, Thelesis, because y’all have hosted me, initiated me, or challenged me specifically across the nation as I went through the various initiations. Also, y’all have some vibrant leadership with amazing creativity at your fingertips.

The rankings should be based on percent increase in regular mass attendance. We can check the reports we turn in annually to see how much bigger the attendance of E.G.C. events (Mass, Baptisms and Confirmations performed, Ordinations performed, etc.) has gotten over the year.