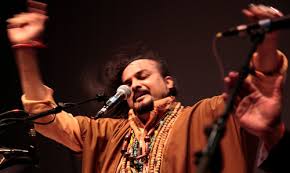 The BBC reports that popular Qawwali singer Amjad Sabri has been assassinated in Karachi, a city in the south of Pakistan. The Pakistani Taliban has taken responsibility for the murder.

Best known in the West via the work of Nusrat Fateh Ali Khan, Qawwali is a form Sufi devotional music.  Muslim extremists view Sufism as heretical. In addition, music-making in general is considered “haraam” (or sinful) to varying degrees by various imams, whether it’s a capella, instrumental or a mix of voice and instruments. Even devotional music is denounced by some, to wit:

“Ibn al-Qayyim (may Allaah have mercy on him) said: How strange! What type of faith, light, insight, guidance and knowledge can be gained from listening to tuneful verses and music in which most of what is said is haraam and deserves the wrath and punishment of Allaah and His Messenger? … How can anyone who has the least amount of insight and faith in his heart draw near to Allaah and increase his faith by enjoying something which is hated by Him, and He detests the one who says it and the one who accepts it? (Madaarij al-Saalikeen, 1/485)” (from: https://islamqa.info/en/5000). So one imagines that Qawwali singers are doubly wicked in the eyes of Islamic Literalists.