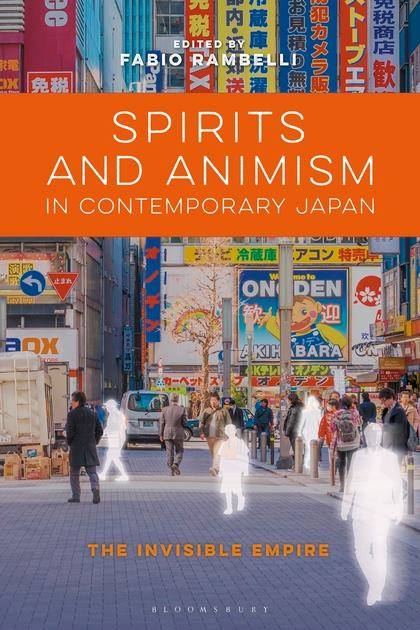 The publishing house Bloomsbury has published a fascinating new collection, Spirits and Animism in Contemporary Japan: The Invisible Empire edited by Fabio Rambelli. The publisher’s sites describes is thusly:

“This book draws attention to a striking aspect of contemporary Japanese culture: the prevalence of discussions and representations of “spirits” (tama or tamashii). Ancestor cults have played a central role in Japanese culture and religion for many centuries; in recent decades, however, other phenomena have expanded and diversified the realm of Japanese animism. For example, many manga, anime, TV shows, literature, and art works deal with spirits, ghosts, or with an invisible dimension of reality. International contributors ask to what extent these are cultural forms created by the media for consumption, rather than manifestations of “traditional” ancestral spirituality in their adaptations to contemporary society.

“Spirits and Animism in Contemporary Japan considers the modes of representations and the possible cultural meanings of spirits, as well as the metaphysical implications of contemporary Japanese ideas about spirits. The chapters offer analyses of specific cases of “animistic attitudes” in which the presence of spirits and spiritual forces is alleged, and attempt to trace cultural genealogies of those attitudes. In particular, they present various modes of representation of spirits (in contemporary art, architecture, visual culture, cinema, literature, diffuse spirituality) while at the same time addressing their underlying intellectual and religious assumptions.”

For more details or to order visit: https://www.bloomsbury.com/us/spirits-and-animism-in-contemporary-japan-9781350097094/.