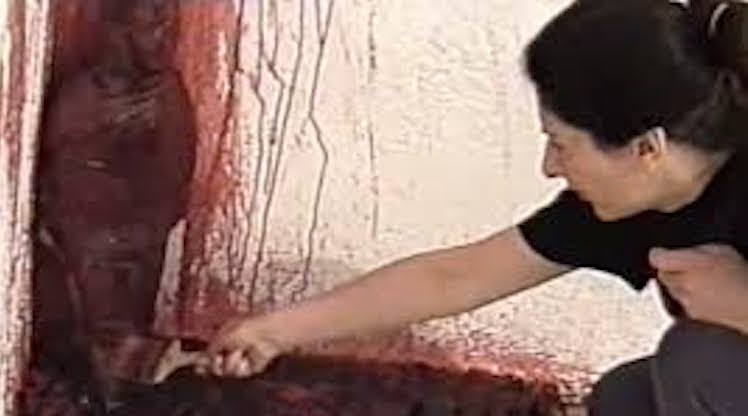 I have finally found an intelligent, mediated and informed statement in response to accusations connecting the Art work of Marina Abramovič with a version of Satanic hysteria. I think it is important that these types of issues are commented upon and addressed. I would like to thank Massimo Introvigne for permission to republish his statement. BWH

A Statement by Massimo Introvigne

Since several reporters called me on Marina Abramovič and accusations of Satanism against her (and, as a consequence, a Clinton associate who had something to do with her), I prepared a statement. It is long, but if one looks for simple answers to complicated question normally one makes mistakes.
Here it is
In the context of a heated American electoral campaigns, some media are accusing Serbian artist Marina Abramovič of being a Satanist. As someone who wrote a 700-page academic work on Satanism – Satanism: A Social History (Leiden: Brill) – I regard the accusation as ridiculous. I recently participated in a session in a conference at the University of Belgrade about the esotericism of Marina Abramovič. There may be different opinions on her esoteric method, but one thing is sure: it has nothing to do with Satanism.
Abramovič is part of a larger contemporary artistic tradition that sees artistic performance as spirituality and healing. This tradition perhaps starts with the paintings of Mondrian and Malevich and in more recent times is well represented by artists within the Italian movement of Arte Povera such as Michelangelo Pistoletto, who wrote a manifesto for a new religious proposal he calls omnitheism. For these artists, the question whether a certain performance is art or spirituality does not make sense. It is both, and in fact art is perceived as a form of spirituality in itself.
Abramovič’s great-uncle was the Patriarch of the Serbian Orthodox Church, so we cannot rule out the Christian element in the formation of her spirituality. However her parents were both staunch Communists and her father was part of the insider circle of the Yugoslavian Communist regime. However, recent scholarship confirmed that within the Yugoslavian Communist Party there were seriously cultivated esoteric and parapsychological interests, although they were not officially acknowledged. Even after the fall of the regime within the Serbian Army there was something called “Group 69” trying to use parapsychological weapons against the enemies of Serbia. It was a curious mixture of Communism and then post-Communism, Serbian nationalism, and esotericism. This is the milieu where Marina was raised.
She always claimed that their performances have a healing content. In a more discrete way, in less public activities, she elaborated what she called the Abramovič Method, which heals through something that is, again, artistic performance and ritual at the same time. The method uses quartz, crystal, and other sacred stones, magnets, a search for the Earth’s energy lines, and old Eastern techniques such as counting the grains of rice.

Abramovič is also interested in Santeria and cooperated with the Brazilian Spiritualist healer John of God and actually served as a Spiritualist medium during some of John’s services.
The teaching was more or less secret for decades, and Abramovič had also private clients for lessons in the Method, including Lady Gaga. More recently, the Method is becoming more public, and the artist is also creating a lineage of sort of teachers authorized by her, including her long-time assistant Lynsey Peisinger.
As for the “Spirit Cooking” performances, I see them dismissed in these hours as just tongue-in-check jokes, as Abramovič created performances where she wrote strange recipes with pig blood on the walls. The recipes were admittedly surrealistic, but for the insiders Abramovič was also alluding, sometimes in an ironic way, to various Western and Eastern esoteric traditions, without necessarily approving them.
Again, this is not Satanism. A Satanist group is a group worshiping the character called the Devil or Satan in the Bible. It doesn’t matter whether they regard Satan as a metaphor or a symbol (as in Anton LaVey’s Church of Satan) or a real sentient being (as, perhaps, in the Order of the Nine Angles, which may well be the largest Satanist group today). The focus of the ritual interaction should be Satan. In the Abramovič Method, worship of Satan plays no role whatsoever.
666 and other “sinister” symbols are used by Abramovič in a rather playful way, occasionally as a pun on fundamentalist/evangelical criticism seeing all occultism and esotericism and satanic. Actually, within the larger genus of esoteric and occult movements, Satanism is a species – an interesting tradition involving perhaps 1% of all existing esoteric/occult groups. But for certain evangelical counter-cult groups all esoteric traditions are Satanist, which is of course nonsensical. A few days ago, on October 23, Jack Chick died at age 92. I am grateful to him for having accepted to be interviewed by me several years ago. He was the quintessential evangelical fundamentalist who regarded all brands of occultism, esotericism, or New Age as satanic. He even denounced parents allowing their children to participate in Halloween as crypto-Satanist. I wrote several articles about how paradoxical it is to see even some Catholics spreading Chick’s ideas about the New Age, Halloween and any conceivable esoteric movement as Satanist, since Chick was a rabid anti-Catholic and for him the Catholic Church was the quintessential Satanist organization. I mention Chick here because he was a very good example of evangelicals believing that everybody who’s not evangelical is a Satanist. And he was not a simple oddity – he sold millions of comics and tracts and was very influential in a certain evangelical subculture.
Abramovič is, first of all, an artist, and artists are often about provocation. Surely she wants to challenge the Christian establishment, particularly because a part of this same Christian establishment attacks the New Age spirituality she is a part of as satanic. In the “Spirit Cooking” series there may be an implicit reference to Crowley, when sperm is mentioned – although magical rituals involving sperm are not unique to Crowley. As the well-known historian of religion’s Mircea Eliade has demonstrated, they date back to Indian and Chinese sources, and are found in a variety of Western esoteric schools, most of them quite far away from Satanism – but what critics do not realize is that these references in “Spirit Cooking” are not necessarily complimentary. Some of the references mean that Abramovič is aware of these esoteric schools, but she does not agree with them. In fact, she believes their methods do not work and a new method is needed – her own. In my book ”Satanism: A Social History” I have a chapter explaining why Crowley was not a Satanist. Like Abramovič, he included in his writing some playful references to Satan or Satanic symbols. But he was very critical of Satanists, as for him Satanists accepts the Judeo-Christian, Biblical description of Satan, while if you really want to oppose Christianity, as Crowley did, he believed you should walk out of the Jewish and Christian Bible altogether.
Abramovič’s spirituality can be classified within the New Age versions of Western esotericism, where different schools and techniques are put together with a sort of esoteric syncretism. But none of these can be even remotely connected to Satanism, and in fact the Abramovič Method is about healing techniques aimed at mobilizing what is positive and luminous in your life and in the Earth’s energies.
At the end of this month, at the American Academy of Religion’s annual meeting in San Antonio, Texas, we will have a session on “The Fear of the Occult,” with me as one of the speakers. My topic there in fact is “The Fear of the Occult and Politics.” There is little doubt that populist politicians like to depict their enemies as part of secret groups involved in the occult. It started with accusations against Queen Marie Antoinette in revolutionary France, and went on with the campaigns against Freemasonry in the 19th century, where Freemasons were accused – falsely – of worshiping the Devil. Basically, it never stopped. It is part of a certain populist rhetorics. The fear of the occult becomes the fear of the elites.

Massimo Introvigne is an Italian sociologist and intellectual property consultant. He is the founder and managing director of the Center for Studies on New Religions, an international network of scholars who study new religious movements