The first volume of Jake Stratton-Kent’s Encyclopaedia Goetica is a reconstruction of the Grimorium Verum from the corrupted Italian and French versions of the grimoire. The True Grimoire comprises a coherent and eminently workable system of goetic magic, with extensive commentary and notes by a practicing necromancer.

The second edition appears thirteen years after the True Grimoire was first published, in which time it has become a critical and foundational work of the current magical revival. As Dr Alexander Cummins observes in his Foreword, the True Grimoire ‘spearheaded a particular renaissance in grimoire studies towards more informed historical analysis and more engaged mythopoetic ritual praxis, all the while centring the realities of hands-on cunning.’

In his introduction and notes to the grimoire, Stratton-Kent elucidates the importance of this concise and comprehensive text to magicians and students of magic alike:

‘The grimoire deals with significant themes that other, often larger, texts have lost, omitted or obscured. […] It enables the persistent seeker to see, essentially, what many have failed to see, that underlying goetic magic is a hidden tradition of great depth and significance. It possesses a traditional methodology that confronts and deals directly with the same primal realities faced by our most remote ancestors; in which all later magic and religion had their original impetus, but which in the West is primarily preserved in goetic magic alone.’

We are given insights across the grimoire tradition into allied texts such as the Grand Grimoire and Red Dragon, the Key of Solomon, the Lemegeton, Abramelin, Honorius and the Black Pullet. This is a treasure trove for the student of magic. Stratton-Kent reveals a grimoire tradition with roots in the Graeco-Egyptian magical papyri and the necromancy of the goês.

The True Grimoire is an elemental and chthonic grimoire of conjuration, pact-making and spell-working. It clearly and concisely explains how to contact and build a relationship with the spirits, and the primary role of the intermediary spirit, whom JSK characterises as ‘akin in a real sense to the Holy Guardian Angel in the Abramelin system.’ The text provides the timing, tools and conjurations for what is an attainable and practical system of magic.

The new edition is augmented by two previously published and out of print essays by the author: ‘ The Spell for Success’ gives a comprehensive analysis of a key part of the Grimorium Verum ritual, which it shares  with a number of other Solomonic works, but which originates conceptually in pre-Solomonic magic; and ‘The Conjuration of Nebiros,’ which details a complete conjuration from the author’s personal work, illustrating the entire process and contextualising it.

The book has been redesigned and typeset by Alkistis Dimech, with necromantic emblems by Artem Grigoryev. In addition, the hardback and fine edition are issued with a letterpress print of The Prayer of the Salamanders. 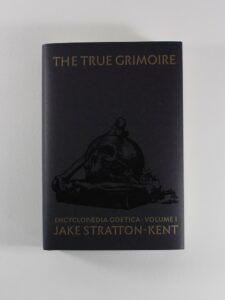