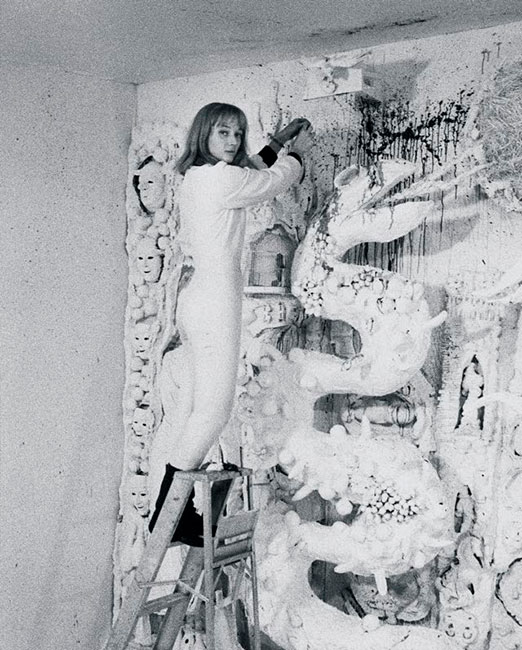 In October 2014 when this blog was inaugurated, one of the first postings included photos taken by the Grand Master of U.S. Grand Lodge of Ordo Templi Orientis of a marvelous, surreal, sculpture garden filled with images taken from the Tarot that he’d visited in Tuscany. This was a project started by the flamboyant Italian sculptress Nikke Saint Phalle (no, I’m not making this up) and she considered it her life’s work. It was one of the most ambitious, outrageous and astounding works she undertook as part of a career that was highly successful despite being filled with outrageous, iconoclastic, visionary work. And it was financed in part by a series of successful business ventures she hatched. The article says in part:

“What Saint Phalle, who died in 2002, left behind in Tuscany is dazzling or deranged, transcendent or tawdry, depending on whom you ask. Amid peaceful olive groves and ochre fields grazed by horses and sheep sits a house-size sculpture of a sphinx, with mirrored blue hair and a bright-red crown, a flower blooming on one of her breasts and a lavender heart on the nipple of the other. The interior is covered in shards of mirror, as if a colossal disco ball had been turned inside out. (During the two decades that Saint Phalle worked on the garden, her bedroom was inside one breast, her kitchen in the other.) A sprawling, fantastical castle, with a rainbow mosaic tower, sits near a blue head some fifty feet high, sprouting a second, mirrored head crowned by a huge hand. Downhill, the Devil stands amid some shrubs, a rainbow-winged hermaphrodite with a sweet face, womanly hips, and three gold penises. It is as if a psychedelic bomb had exploded in the most picturesque part of Tuscany.

“When Saint Phalle entered the asylum, in the early nineteen-fifties, she was a twenty-two-year-old wife, mother, erstwhile fashion model, and lapsed French aristocrat. Art, she believed, returned her to sanity, and she wanted to make a monumental sculpture garden that would, in turn, heal others. It would be in the fanciful style of Antoni Gaudí’s Park Güell, in Barcelona, but each structure would represent a mystical figure from the tarot deck. She would create an alternate reality—’a sort of joyland, she once said, ‘where you could have a new kind of life that would just be free.’”