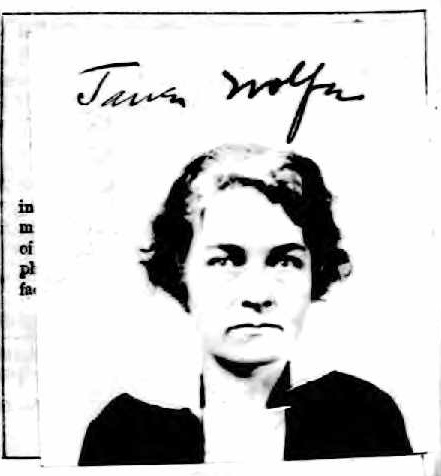 There’s a handy compilation of surviving movie scenes in which Jane Wolfe (Soror Estai) appears posted on Youtube. Although she acted in over 100 films, most of these do not survive.

“Jane Wolfe was admitted as an A∴A∴ Probationer on June 11, 1921, during her residence at the Abbey of Thelema in Cefalu. Her admitting Superior was Aleister Crowley. As is customary in the A∴A∴, two copies of the Probationer oath were prepared, one to be retained by the Probationer, and one to be retained by the Order. The original of the copy Crowley retained is presently in a major university library collection. The original of Jane’s own signed and sealed copy, long held and preserved by Soror Meral, is presently in my own possession.

“At her admittance, she took the aspiration name Estai. Years later, she rearticulated her aspiration in the words, “I will become the creative Force of the Universe,” which became expressed in the new motto, Fiat Yod.”

Having returned to Los Angeles from Cefalu she was very much part of the nascent Thelemic community there, being involved with Agape Lodge, O.T.O., continuing to correspond with Crowley, mentoring Phyllis Seckler and such. I don’t think it’s stretching things to say that she was crucial to the survival and revival of O.T.O. and Thelema following Crowley’s death.