Frater Orpheus posted to his FB feed:
Posted this a couple of years ago but many missed that I had digitally restored the images – these are the best you will see of some these…
Do what thou wilt shall be the whole of the Law
Today’s post focuses on three articles that included many of the photos we all know and love from the Rites of Eleusis. The first two borrowed heavily from Crowley’s Rites of Eleusis booklet and included photos shot by Dover Studio, who also provided the photos from the Rite of Artemis (previously mentioned in yesterday’s post).
The first article appeared on October 8, 1910 e.v. in the periodical “What’s On” and featured a picture of Crowley, with a gold nemyss and a leopard skin, on the cover. On that same day, the periodical “Occult Rites” published an article which featured a full-page image of Crowley as “The Guardian of the Flame”. Minus the images, these articles were nearly identical.
The third and final article appeared in the October 12th, 1910 issue of “The Bystander”. It was entitled “Nine O’clock Ecstasies” and included several now well-known images. However, what many do not know is that these images were shot during rehearsals for the Rites of Eleusis and hence there are a couple discrepancies between the images and the scripts. Nonetheless they are generally representative of the actual performance and without this article several of the images we all associate with Eleusis would not exist.
The final article is reproduced in full below:
Nine O’clock Ecstasies! – Nocturnal Planetary Rites a feature of the London autumn season
The first of a series of seven rites, each dedicated to one of the planets, is to be held at the Caxton Hall, Westminster, on Wednesday, the 19th (Saturn night), at nine sharp. You are requested to attend in black or very dark blue for Saturn, and similarly appropriate colour-schemes in turn for the other planets. The general object is to produce in the subject a carefully selected “ecstasy.” In the case of Saturn, you should become, as you watch the rites, austere and melancholic; in Mars, of course forceful and fiery; with Venus – but why labor with the obvious? Sufficient has been said to indicate that nine o’clock ecstasies will be an unusual and exciting experience. To obtain admission, one must communicate with the “Guardian of the Flame” himself, in the flesh, Mr. Aleister Crowley, the poet (compared with Coleridge, Shelly, Keats, etc.), and Editor of “The Equinox,” 142, Victoria Street.
Love is the law, love under will
Frater Orpheus 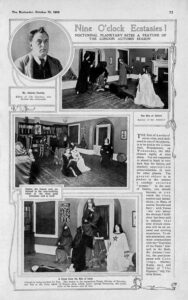