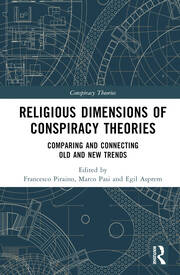 Perhaps you’ve noted the points of commonality between your stock, socio-political conspiracy theory and the worldviews held by devotees of occult religious doctrines. Looming large is the belief that things are not as they seem or are portrayed by mainstream societal institutions but are functioning on mysterious bases and that gaining knowledge thereof is a key to great personal power for the discoverer. So I’m thinking that Francesco Piraino, Marco Pasi and Egil Asprem’s new book, Religious Dimensions of Conspiracy Theories,  just published last month may be of interest. The posted description says:

“The book examines both historical and contemporary examples to explore transnational and transhistorical continuities between religious doctrines, eschatologies, and conspiracy theories. It draws on a broad range of disciplinary insights from historians, sociologists, anthropologists, and religious studies scholars. The book has a global focus and features case studies from North America, Europe, the Middle East, Asia, and Africa.

“This book will be of great interest to researchers of conspiracy theories, esotericism, extremism, and religion”