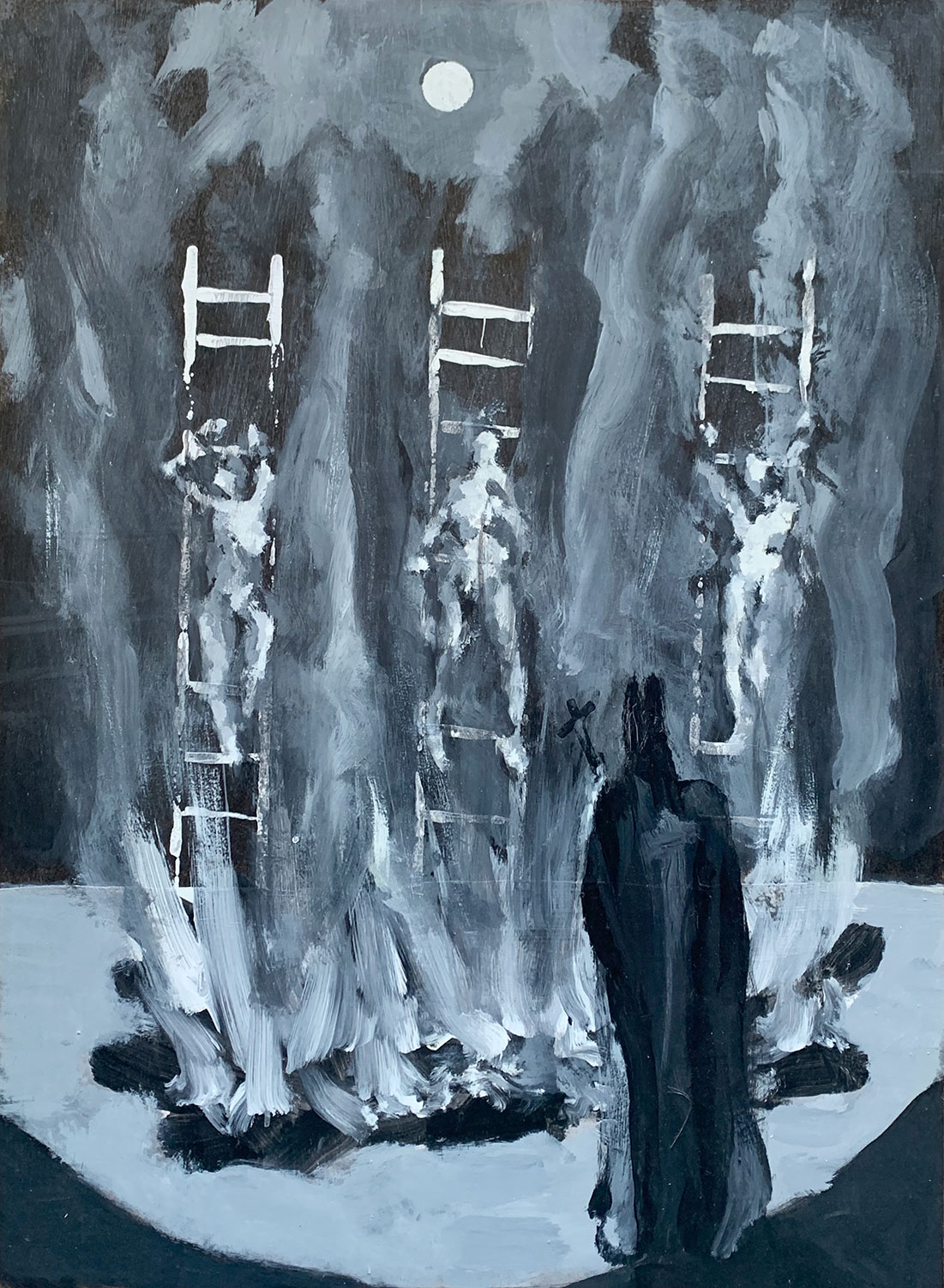 “My first encounter with Ray Robinson was in the fall of 1981 as a 19 year old, in Sarnia Ontario.  He visited the community college where I was studying art, as he was set to take over the department’s program in a few weeks..  My good friend the late Canadian painter John Haxton and I spotted him by himself, peering over a balcony overlooking the college’s dining room. Oddly, he seemed to be engrossed in something.  We were very curious about the man who was going to shepherd our direction, however, we thought we’d give him a taste of our irreverence (speaking for myself, of course) so we approached him.  As we did,” I swear I saw him look up at us, and make an arc of light with his finger around his head. The world stopped. I had never seen anything like this before.  I was simultaneously humbled and baffled, not sure if what I had just seen was real or not. He, still from a distance, seemed amused as though he had both sent out a friendly greeting, and was also having a cosmic giggle on us. Yet, I had damn well better show due respect, was the message. ( A worthy opponent)

Tongue tied, I asked Ray..  “what will you teach us?”  He replied, pithily..  “do you see the chaos around you?  the world is in visual chaos.. see that table over there? It’s floating, it isn’t visually attached to the ground..” He went on for several minutes detailing how the entire mise en scène before us was a world of visual chaos, all the while gesturing with his arm and hand in space how it should be re-ordered.. “..the whole world is in visual chaos, and I’m going to teach you how to order it, I’m going to teach you how to see”..

I tried to grasp at my old life as pretty much everything I thought I knew imploded. I timidly said (and he still jokes about it), “I don’t know what you’re talking about”.. I remember the look of pity he gave me, and how I vowed to myself to defy his low expectation of me, as though it was my last act on this earth. I remember John remarking afterwards “what if we find out he’s insane?” to which i replied, without trying to be clever, “Better yet, what if we find out WE are the ones who are insane?”.  The echo of those words still reverberate in the caverns of my unconscious some 40 years later, almost to the day.

Not long after our apprenticeships with Ray Robinson began, he advised me to close the art history books and read “Journey to Ixland” by Carlos Castaneda..  “Everything you need to know about being an artist is in there” he said.  I to this day still refer to that book, the very same copy. And thus began my initiation with the master. He still even calls me “grasshopper”, and I still, in vain, try to snatch the pebble from his hand.

Ray Robinson “THE BIRTH OF A WITCH” 2016 “SHE LIVED AT THE BOTTOM OF THE WELL OF THE NIGHT. THEN, MOVING, AS ALL THINGS MOVE BY CHANCE, THE LIGHT TOUCHED HER. NOW, THROWING OFF HER CLOAK OF DARKNESS AND MOON CLAD SHE BEGAN TO MOVE” It has been a journey of magic, lucid dreams, using death as advisor, and doing my best to be worthy of his teachings.  I hope in presenting this exhibition of his captivating works, I have made some small contribution to the spirit of man, and have made a small dent in the massive debt I owe Ray Robinson, without whom’s influence, I would be a thin shadow of the man I am..

In this exhibition of paintings produced between 2015 and 2016, the artist confronts his native England’s often difficult – and contentious history with witchcraft. While selections from the series were previously included in group exhibition curated by Stephen Romano, this is the first exhibition devoted to the entire series. A catalog with contributions from Alfred Rosenbluth, Charlotte Rodgers and Steven Intermill will accompany the exhibition.

Ray Robinson was born in the UK in 1931 and began his professional career as a mathematician. Seeking a significant change of course in his life in his late 20’s, Ray discovered the works of David Bomberg, Alberto Giacometti, Paul Cezanne. He was heavily impacted by their attempts to create a visually ordered perceptual space within their works, as well as seeking to create a visual immediacy through truth to materials. Ray Robinson “THE DAY THE WITCH LYN BURCHETT WAS GIVEN SHORT SHIFT AND HANGED. HER BODY BURNED IN THE GROUNDS OF DOLBADAM CASTLE” 2015 This set Ray off on a path of working directly from the model, which he continues to do to this day, living in seclusion with his wife Brenda in Nova Scotia. While his works are most often straightforwardly figurative—landscape or still life–this body of work is the exceptional, delving into dark corners such as witch burnings and hangings, demonic apparitions, paranormal visions, occult rituals, and the old religion. Ray Robinson’s affinity to these subjects germinates from him spending his summers as a young boy with his grandmother, who apprenticed him in the old ways of the witch.

In the early 1960’s, Ray was accepted as a student at the esteemed SLADE School of Fine Art in London under the tutelage of sculptor Reg Butler, where he befriended and exhibited alongside many of the major British artists of the 1960’s such as David Hockney, Frank Auerbach, Henry Moore, and others. Fellows Auerbach and Leon Kossoff, also followers of David Bomberg, and Ray Robinson, were at the forefront of a revival of the pendulum of taste swinging back toward painting as beauty for beauty’s own sake.

Due to his controversial teaching methods being challenged, and a subsequent rebellion by his faithful students at Bath Academy, Ray decided to make a move across the Atlantic. He began teaching art in London Ontario, and later at a community college in Sarnia, Ontario, a small city which borders the US just north of Detroit. This is where the exhibition curator first met the artist when he was 19 years old and continues to hold a lifelong apprenticeship on Art, Life and Magic with him.

Ray Robinson has spoken only occasionally of “The Third Door”, which is shrouded in mystery.

Each of the paintings has a true circumstance…and the result of my ‘being there’ and so pass through the matrix of memory and through the archetype that defined the first vision and set our Parameters.. To an inner meaning without external references. Ray Robinson “THE BEGINNINGS OF RELIGION – THE SCYRING POOL” 2015