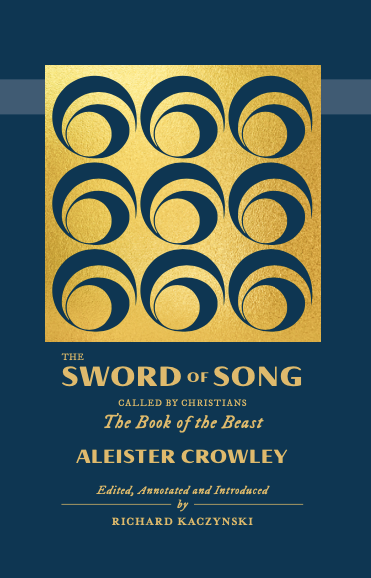 UK occult publisher Kamuret Press has opened pre-orders for a new edition of Aleister Crowley’s The Sword of Song, edited, annotated and introduced by Dr. Richard Kaczynski. The publisher’s blurb on FB says:
“Edited, annotated and introduced by Richard Kaczynski, this edition far surpasses that found in the Collected Works: red and black ink has been employed to capture the feel of the 1904 edition; a 50 page introduction by Crowley’s foremost biographer introduces the reader to the many themes to be found throughout the book; finally, copious end-notes further elucidate concepts and ideas in need of clarification.
From the introduction:
“‘The Sword of Song is arguably the greatest story never told. It is a book of firsts: his first manifesto, his first talismanic book, his first mystical essays, his first nod to sexual mysteries, and an enticing preview of what was to come in The Book of the Law, the spirit-writing that would form the cornerstone of his philosophy’.
Sword of Song standard edition:
“333 copies of the standard edition, 464pp, printed on 100GSM Munken Pure, in black and red ink, sewn-cased binding with Wibalin buckram sapphire cover boards, and gold foil blocking on spine, Winterband blue & white head & tail bands, blue ribbon and endpapers, £35.”
https://kamuret.com/pre-orders-open/