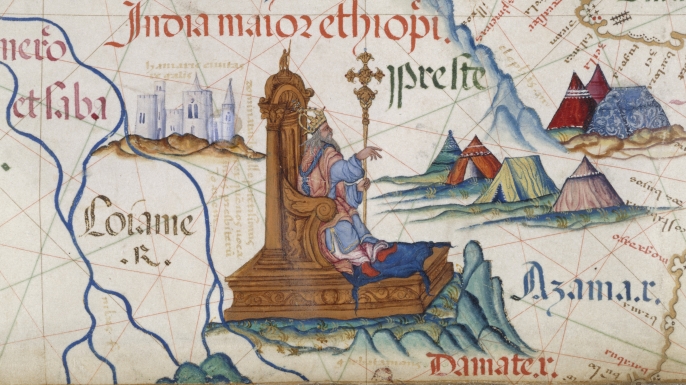 One of the fun things to do as a magician is to look at legendary and literary figures that may or may not have been real, and reach out to see if there is any “there” there. being interested as I am in the cross-over between Eastern and Western traditions, the Medieval legend of Prestor John, a descendant of the three magi who ruled a hidden magical Christian Kingdom in the east always resonated with me. While the legend became something of an anti-Muslim bit of Crusader propaganda for a time, that has never been at the heart of it.  A few years ago on the feast of the Epiphany I wrote this short prayer to the Presbyter King asking for the wealth of both wisdom and worldly goods. There is not much too it, just to face east (if you are in America or Europe, you can choose your own direction when elsewhere) light a beeswax candle and pray. The beeswax speaks to things that valuable because of the purity, so if you spend a few bucks on the candle, it is worthwhile. Repeat for 9 days. Let the candle burn all the way down on the 9th day.

Oh Ruler of the Secret Kingdom of Wisdom and Wealth
Hear my prayer
Descendant of the Magi who followed the Star of Jacob
You returned to the lands that they left, with the glory they discovered.
I speak to you now in your land beyond time and space
Where the rivers of Paradise Pool
And you sit on your throne upon what remains of the Tower of Babel
Hear my prayer
Touch my head with your Emerald Scepter and increase my knowledge of magic.
Let me feet tread upon your hidden land, so that my own territory may be enlarged.
As you have kept the secrets of St Thomas from the eyes of world,
Keep me and my family from evil and harm.
Oh Prester John, Priest and King
Intercede for us with God
And bring us into the secret Kingdom
of Heaven on Earth
Amen.