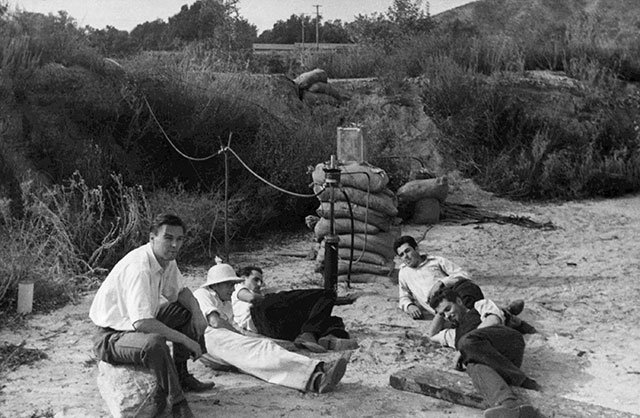 Obviously you’re aware of the descent and touchdown on Mars of the rover Perseverance. You may have noticed the signage on display in the mission’s control center. If not — have a look:

Besides “Mars 2020” there’s logos for NASA and JPL. JPL being the Jet Propulsion Lab located near Pasadena California.

“The origins of the Jet Propulsion Laboratory date back to the 1930s, when Caltech professor Theodore von Kármán oversaw pioneering work in rocket propulsion. After unsuccessful and sometimes hazardous experiments, several graduate students led by Frank Malina, along with rocket enthusiasts from the Pasadena area, moved their work off campus. They chose the Arroyo Seco, a dry canyon wash north of the Rose Bowl in Pasadena, California – and future home of JPL.”

Below this paragraph is an archival shot of original group that conceived of and undertook these experiments, none of whom are named anywhere in this historical piece except in the caption of this picture:  Rudolph Schott, Apollo M. O. Smith, Frank Malina, Edward Forman, Jack Parsons.

I figger I don’t need to go into the lore about the last member of this team. I’ll just say that as a devotee of a man who once took the magical name “Perdurabo” that seeing the company he helped found put a Mars probe called “Perseverance” likely would have made him smile. Wickedly.

persevere: continue in a course of action even in the face of difficulty or with little or no prospect of success.”