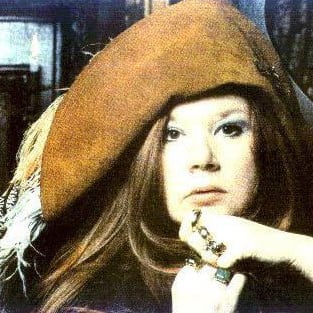 Several Sci Fi sites have posted the sad news that veteran Science Fiction and Mystery writer Patricia Kennealy Morrison passed away July 22 at age 74.  Besides her prodigious output as an author, Kennealy is known for having been handfasted with Doors’ lead singer Jim Morrission is 1971, as depicted in Oliver Stone’s biopic. The postings say:

American SF & mystery author Patricia Kennealy Morrison has died in her sleep. She was 74.

Morrison’s published works include rock criticism, a memoir, and two series of science fiction/fantasy and murder mystery novels. Her books are evenly divided between the series The Keltiad and The Rock & Roll Murders: The Rennie Stride Mysteries.

Her other significant book was Strange Days: My Life With And Without Jim Morrison [1992].

As first a writer and then the editor-in-chief of Jazz & Pop magazine in the late 1960s, she was one of the first women rock critics. She was a Dame of the Ordo Supremus Militaris Templi Hierosolymitani, a High Priestess in a Celtic Pagan tradition and a member of Mensa.

Her sister Regina passed away earlier this year with cancer, and her handfasted beloved Jim Morrison in 1971.

In the 1980s, Kennealy-Morrison began publishing an epic space opera series, The Keltiad, which followed a group of Celts who left the British islands around the year 450, although the books were set in the 35th century. The series was comprised of two trilogies, beginning with The Copper Crown, a stand-alone novel, and four short stories collected in Tales of Spiral Castle.

In the 1990s, she turned her attention to writing mysteries and eventually set up her own imprint, Lizard Queen Press.