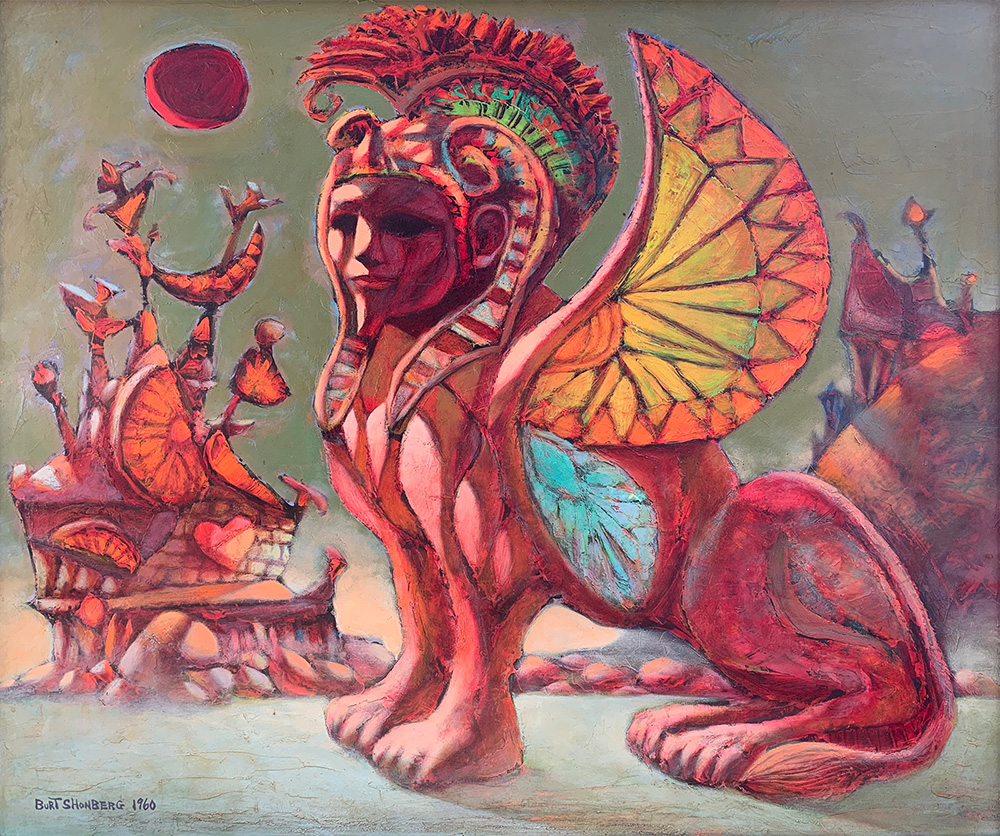 A work by Burt Shonberg included in the exhibtion “Beyond the Pleasuredome: The Lost Occult World of Burt Shonberg”. Courtesy of Stephen Romano Gallery, Brooklyn NY.

Visitor to the exhibtion “Beyond the Pleasuredome: The Lost Occult World of Burt Shonberg”
curated by BRIAN CHIDESTER at the BUCKLAND MUSEUM OF WITCHCRAFT AND MAGICK, Cleveland Ohio Through NOVEMBER 1 2021 Available at the Buckland Museum of Witchcraft and Magick bookshop.

The Buckland Museum of Witchcraft and Magic in Cleveland, Ohio, and Stephen Romano Gallery in Brooklyn, are pleased to present the first exhibition of art by the L.A. visionary BURT SHONBERG (1933-1977) in over 50 years. The exhibition opens August 17 and continues through November 1, 2021.

The exhibition is curated by historian, documentarian, and longtime Shonberg advocate Brian Chidester. It is accompanied by a catalog, the first ever catalog exclusively devoted to Burt Shonberg’s art, with essay also by Chidester, an introduction by Minneapolis Institute of Art curator Robert Cozzolino, a director’s foreword by Steven Intermill of the Buckland, and contributions by Marshall Berle, Hampton Fancher, and the esteemed filmmaker Roger Corman (The House of Usher 1960, Premature Burial 1962).

“As two artists moving into new modes of expression in our work, our introduction was fortuitous. His preoccupation with monsters, aliens, the occult and other horror elements in his art resonated with me. Most importantly, I could see he was a major talent exploring new ground in form and color. I knew right away that Burt’s artistic sensibilities would lend much to my new film..”

– Roger Corman, director of “The House of Usher” and “The Premature Burial” which featured the art of Burt Shonberg. Artist Burt Shonberg with his painting of the House of Usher, legendary actor Vincent Price and the esteemed director Roger Corman on the set of the film “The Fall of the House Of Usher”

Born on March 30, 1933, in Revere, MA, Shonberg studied art in the fifties at the Boston Institute of Fine Arts and the Art Center, Los Angeles. His interests were in the occult, UFOs, science fiction, and horror movies, in particular, the Frankenstein monster, whom the artist consider something of an alter-ego.

“..Shonberg was too strange for even the ’60s California sci-fi world, and too far removed from the fine art establishment, to be embraced by either. Even today, when radical viewpoints are commonplace in the art world, Shonberg has yet to receive recognition. Meanwhile, a unique body of work remains hidden in plain sight.”

During his lifetime, Shonberg was associated with the artist/occultist Marjorie Cameron, who probably introduced him to the mythos of Aleister Crowley and the ceremonial use of peyote. Shonberg later participated in 1960 in the experiments of Dr. Oscar Janiger on the effects of LSD on the creative mind. Shonberg’s art was prominently used in Corman’s classic film The House of Usher and several others in the late 1950s and ’60s.

The relationship between Shonberg and Cameron—the widow of rocket inventor and Crowley disciple Jack Parsons—perpetuated Shonberg’s interest in the occult and his early exposure to hallucinogenic drugs. Their relationship lasted a little over a year. Vincent Price and Mark Damon in the film “The Fall of the House of Usher” (1960) with two of the ancestral portrait created by Burt Shomberg for the film.

Shonberg, along with friend and television writer George Clayton Johnson, and their third partner folk singer Doug Myres, opened the Cafe Frankenstein in Laguna Beach, California in 1958, a beatnik coffeehouse where some of the paintings in this exhibition originate. Detail of the interior of “Cafe Frankenstein” with murals and petroglyphs painted by Burt Shonberg. Photograph from “Le Petit Sphinx” magazine.  see more at www.cafefrankenstein.com

By 1960, Shonberg and his partners sold their interest in the Cafe Frankenstein to the Beat couple Michael Schley and Connie Vining, who kept the venue going until 1962. Upon the sale of the cafe, Burt Shonberg paid off his remaining debt to George Clayton Johnson by gifting him a group of paintings, which comprise the works in this exhibtion.

“Wish I could offer up a decisive comment, but it was such a special time and he was such a unique and special person and what he did was so far out, it deserves more than I have the time to do justice to.”

Buckland Museum of Witchcraft and Magick Director Steven Intermill says “It’s a thrill to be able to host Burt Schonberg’s first solo exhibit in 54 years in our museum dedicated to the hidden arts. Back in the 1960s our founder Raymond Buckland was on the East Coast exploring the liminal headspace through witchcraft & magick, Schonberg was on the West Coast charting his own maps of the unconscious. Here we are in Ohio, the midwest of the USA, and the two can combine. In these paintings I see an Old World witchiness with a New World exploration. The subjects of Schonberg’s paintings walk a line between that ol’ time mystery and something new, even five or six decades after their creation.”

“Burt Shonberg was more than just an artist, he was a “prospector of consciousness” who traveled to areas outside of our collective awareness and painted what he saw during those excursions.

~ Marshall Berle former manager of Sprit, Van Halen and many others, and producer of “Out Here” a “Film About Burt Shonberg “LSD” artist.” see trailer here The collection of works that comprise this exhibition straddle the time when Shonberg was avidly using peyote and when he began experimenting with LSD.

This important group of works was acquired through the Stephen Romano Gallery in 2021 from George Clayton Johnson’s descendents, and are being exhibited at the Buckland Museum of Witchcraft and Magick for the very first time

“There is intention to Shonberg’s vision and a community that supported it and shared in its possibilities. If it is hard to understand it is because our eyes and frame of reference has been honed to a specific image of what art should be – what is acceptable, what is tasteful and how artists should act. Look away from that and there is a multitude of alternatives to which audiences today demand access. They want to know how artists opened up new doors and what it looks like through those portals. ” – Robert Cozzolino, Patrick and Aimee Butler Curator of Paintings, Minneapolis Institute of Art. Exhibition curator Brain Chidester and Buckland Museum of Witchcraft and Magick director Steven Intermill discuss their observations about this painting, and much more, in this pre-opening conversation which occurred the day this historic exhibtion opened August 17 2021.  Exhibtion producer Stephen Romano also co-hosted the discussion.

A painting probably depicting the bride of Frankenstein, included in the exhibtion “Beyond the Pleasuredome: The Lost Occult World of Burt Shonberg” Courtesy of Stephen Romano Gallery, Brooklyn NY.

one of the works on display in the exhibition “”Beyond the Pleasuredome: The Lost Occult World of Burt Shonberg” Courtesy of Stephen Romano Gallery, Brooklyn NY.

“In the year 1957, in Los Angeles, California, I had my first dramatic experiences beyond the limits of so- called ordinary, everyday consciousness. This was not induced by any chemical means or yogic-type efforts on my part it came by itself and took me by surprise. Every day, for seven years straight, I was hit by a number of widely-separated, momentary blasts of unexpected light.
­

ii ­These initial experiences (of being unexpectedly and mysteriously shanghaied out of moving time and into The Eternal now were of such a nature that I saw all the usual, generally-accepted notions of what this world is all about as being sheer imagination. Also, the quality of these experiences was such that I knew that what I was seeing, strange and shocking as it was, was unquestionably true. At that time I had been wholly unprepared for this robbery of my dream state and so my initial reaction to this experience was stark terror. During these first awesome unveilings of where we are and how it is, I witnessed the undeniable truth of our situation in ordinary worldly life and this was so frightfully staggering that I no longer had any choice in my life concerning what to be serious about. I knew I had to experience that Great Light again, somehow, but also I knew I had to be able to withstand the great shock of full Consciousness. It was at this time that I actively began to search for A Way.

iii ­ Since this time, via various methods, I have experienced a considerable number of altered states of consciousness. Amongst the methods employed to accomplish this was the use of what are termed psychedelic (mind-manifesting) substances. In 1960 I worked with a research project under the direction of a Los Angeles psychiatrist, Dr. Oscar Janiger, who was studying the effects of LSD-25 on the creative process. My participation in the project was that I had to do paintings under the influence of LSD-25. I came to realize that the significance of art resulting from the psychedelic experience could possibly reach to actual magic and beyond. Also, very interesting discoveries might be communicated through art by capable creative minds that are familiar with the experience and these discoveries could come through any existing form of art. There are, of course, certain things that one experiences in the transcendental state that are not possible to communicate in the usual way, so new types of parables would have to be created to get the message through. These discoveries I refer to could be insights or revelations into various aspects of the world we live in, nature, the mind itself, time, the universe, reality and God.”

Excepted from “OUT THERE: A brief account of how this all began for me.
By Burt Shonberg With Ledru Shoopman Baker III

Courtesy of Marshall Berle, director of the documentary on Burt Shonberg “Out Here”, a film about Burt Shonberg. Painting by BURT SHONBERG from the collection of Ringo Starr.